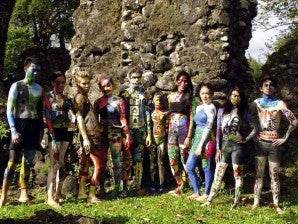 WITH the human body as canvas, artists depict Cagsawa in the Pintura Cagsawa contest held last Feb. 13 at the Cagsawa Ruins in Daraga, Albay, as part of the town’s 2nd Cagsawa Festival. REYNARD MAGTOTO/INQUIRER SOUTHERN LUZON

For Albay artist Albert Romero, using the human body as a canvas to depict the origin of the Cagsawa Ruins brought him well-deserved recognition.

Romero, 23, became the grand prize winner of the Pintura Cagsawa contest held in Daraga town in Albay on Feb. 13. He and nine other artists were given five hours to render their masterpieces in the event held as part of the second Cagsawa Festival.

It was more than just a drawing. It told a story. Romero said the area where the ruins now sit is known to be home to snakes in the past, therefore the name Cagsawa. Folklore said Cagsawa is from the word Kagsawa-kag meaning owner and sawa meaning python.

The belfry of Cagsawa Church was also the highlight of Romero’s body art as it was painted on his model’s midsection.

Only the belfry of the stone church survives today after the church was destroyed during the violent Mt. Mayon eruption on Feb. 1, 1814, when ash and lahar buried at least 1,200 people in Cagsawa town and its surrounding areas. 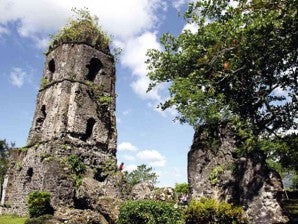 Cagsawa used to be a town during the Spanish period but local historical accounts said survivors of the 1814 eruption resettled into nearby Daraga, which was then a mere village of the destroyed Cagsawa, and opted to merge the two places.

Today, the Cagsawa Ruins is the most visited tourist spot in Daraga town and is now a park run by the municipal government.

His art piece earned Romero the nod of the judges who gave him an average score of 93.66 percent to become the top winner with a cash prize of P5,000.

Bert Gonzales was second with P3,000 and Martes Gonzales, third with P2,000. Julius Martinez, Daraga tourism office creative staff, said body art was used to depict Cagsawa because what is painted on the body would help people become more aware about the origins of a place.

He conceptualized Pintura Cagsawa last year so the people of Daraga and Albay could get a chance to showcase their masterpieces through body painting. The Cagsawa Festival is the only town festivity in Albay province that showcases body art.

Martinez said the Daraga tourism office was overwhelmed by the number of participants in this year’s tilt compared with last year’s when there were only three competing artists.