Rizalito David wants God back in center of governance 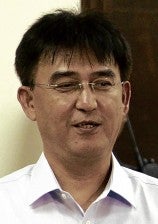 Finding inspiration in this West African proverb, radio commentator Rizalito David of Ang Kapatiran Party believes that this time around, he is closer to winning a Senate seat.

During the 2010 elections, David also ran for senator but lost.

“[The adage] ‘Speak softly but carry a big stick; you’ll go far,’ that’s what we’re doing now. Kapatiran candidates may not be as visible as the senatorial candidates of other parties, but we’re definitely doing our homework to win,” David told the Inquirer in an interview.

The 51-year-old David said his extensive experience in crafting laws when he was a legislative staff and consultant to several senators and congressmen makes him qualified to serve as a senator.

“I spent more than half of my career life in legislation in the Senate and Congress. In fact, I was among the people behind many of our existing laws,” he said.

He noted that his work involved, among other things, conducting research and providing background information on issues being addressed by legislation.

From 1993 to 1995, David worked as executive assistant and committee secretary or the supervising legislative staff officer of then Sen. Francisco Tatad. He later became Tatad’s political affairs director.

In 1997, David became consultant on political affairs and head of the political operations for Mindanao under the Office of Deputy Speaker Hernando Perez at the House of Representatives.

He worked as former Sen. Robert Jaworksi’s head executive assistant and concurrent director for political affairs from 1998 to 2004.

David credited Tatad for the kind of intellectual discipline he instilled in him. He said he was also happy to have served Jaworski as he cited the latter’s inspiring “never say die” attitude toward work.

A sociology graduate and a holder of a master’s degree in environmental studies from the University of the Philippines Los Banos (UPLB), David said many of the legislation he worked on were about the environment and natural resources.

Among these laws include the Clean Air Act, Solid Waste Management Act, Clean Water Act and the Philippine Mining Law.

David emphasized that his love for the environment goes beyond taking to the streets to rally or protest about certain environmental issues.

“You won’t see me shouting on the streets, calling for protection for this and that. I tend to look at the environment more in an academic fashion. I’m usually out on the mountains, studying how best to conserve soil and water, scientifically, empirically … That is the type of environmentalism I follow,” he said.

Prior to his stint at the Senate, David served as a research assistant for the UPLB Program on Environmental Sciences and Management. He later became an instructor at the UPLB Department of Social Sciences and Graduate School.

He then became development management officer for the Department of Environment and Natural Resources (DENR) Upland Development Program. Years later, he worked as the agency’s chief of the Strategic Planning-Planning and Policy Studies Office.

He entered mainstream politics when he became chief of the Research and Monitoring Staff of the Liberal Party-PDP Laban for the 1992 elections.

David, a father of three grown-up kids, said his family was supportive of his attempt to join politics again.

A product of a broken home, David, who was born in Tondo, Manila, said he considers his grandfather Tiburcio among his greatest influences in life.

“He taught me basic good manners, like never to look at other people’s plates with envy. I learned so much from him.”

He also counts Kapatiran founder Nandy Pacheco and Prolife Philippines as among those who have a strong impact on his life.

“Their passion for their faith is amazing. In addressing social issues, their fundamental grounding always lie on their faith,” he said.

If he wins, David said he would use his experience and technical expertise in crafting more science- and empirical-based legislation.

“It’s not sufficient that you consult a few people, which is what’s happening now. They come up with laws based on say-so of only a few people. The issue is not widely discussed,” he said.

David admits that since Kapatiran candidates could not match the electoral machinery of traditional politicians, they are banking on the Catholic vote to make them win seats in the Senate.

But how confident is he that these organizations would back the Kapatiran candidates?

“They have no other option. We are the only party that upholds the social teachings of the Church,” he said, adding that the party’s bets also enjoy the backing of the Muslim community and other religious sects.

He said the country’s Catholic lay organizations would again band together to conduct a voter’s education drive against candidates who support the “anti-life” reproductive health (RH) law.

He said he decided to run again because he believes he is on a mission.

“You don’t stop just because you once lost. You just have to keep on fighting,” David said, admitting that there are times when he feels tired and frustrated pushing for the causes he is fighting for.

“I started fighting when I was 17 when I joined the underground movement. At 19, I was among those included in the military’s order of battle,” he recalled.

But while he then fought for a just and humane society based on ideology, David said he is now fighting based on his faith.

“Our intent is really to put back faith in the center of things, put back faith in God, in governance,” he said, stressing that they aim “to evangelize politics to bring about change in the Filipino people’s lives.”

“So when I get to the Senate, I am, firstly, a Catholic Christian before I’m a senator, as simple as that. And I want every piece of legislation, every program and policy that will be made by government to reflect my faith,” he said.

And the RH law is certainly not one of those things, according to David, an active member of the Pro-Life Philippines.

“We will repeal the RH law. If the Supreme Court fails to rule that it is unconstitutional, we will go for the repeal of the law because it is not in accordance and reflective of our Christian faith,” he explained.

David said Kapatiran canditates share a common platform. They vow to fight political dynasty and push for the abolition of pork barrel, a legislated gun control and the passage of the freedom of information bill.

But personally, David said he would like to advocate for industrialization.

David said he would also push for a strengthened environmental protection provision in the existing mining law.

“If it needs further strengthening, I will introduce amendments to strengthen environmental protection side. It should be an industry that should serve the purpose of industrialization,” he added.