Ricardo Penson seeks to represent those left out 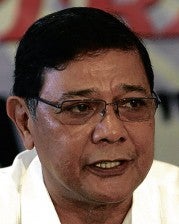 For businessman Ricardo Penson, the lone independent candidate for senator, running for office is part of his continuing personal and public battle against political dynasties.

“Political dynasties are the root of all evil in our country—whether political, socioeconomic or cultural. It disenfranchises our people, it subverts the will of the people,” Penson said in an interview.

After keeping away from politics for a number of years, Penson reemerged last November to launch the Krusada Kontra Dynasty, which he said was spurred by the announcement of the senatorial slates of the administration and opposition coalitions.

“They couldn’t even complete a lineup of 12 people, out of 96 million Filipinos, which is disheartening. Candidacies are based on name recall and popularity. What is wrong has become the norm here. Look at our Senate now, have you heard of any good debates lately? Not in the last two decades you haven’t,” he said.

Penson is pleased that many candidates have adopted antipolitical dynasty slogans. “The people are mad at and tired of dynasties. I’m glad that people have jumped on the bandwagon. I’m glad that it’s finally reaching the awareness of the voters,” he said.

“This (May 2013 polls) is the pivotal election in [our] history. If we do not reduce, substantially, political dynasties, it’s a matter of which political dynasty will rule us in 2016,” he said.

Penson has filed a case with the Commission on Elections for the disqualification of candidates who were “obviously” from political dynasties. Earlier, he joined in petitioning the Supreme Court to compel Congress to pass a law defining dynasties but the high tribunal junked the suit, citing the separation of powers principle and the political question doctrine.

Born in Caloocan City in 1952, Penson studied at San Beda College and then at the University of Pennsylvania’s Wharton School.

He said he became a member while in college of the leftist Kabataan Makabayan, which was involved in progressive issues and in the fight against the Marcos dictatorship. He was arrested and detained in Camp Crame for five days in 1978.

Penson said he was beaten up and tortured. He pointed to a scar on his forehead, which he said he sustained when he was hit with a gun by a soldier. He said he never again saw the two youth leaders who were arrested with him.

With the help of “secret friends” in the military, Penson fled the country and lived in exile in the United States, returning only after the 1986 Edsa People Power Revolution.

Penson said he helped his late father Cecilio, a lawyer, in privately advising several members of the Constitutional Commission that drafted the 1987 Constitution to make sure that the abuses of the old regime would never be repeated.

He said he also got to know about conditions in the country when he served from 1987 to 1992 as a special assistant for national security and political affairs at the Office of the President.

In 1992, Penson, who then chaired the Partido Demokratiko Pilipino-Liberal Party coalition in Quezon City, ran for Congress in Quezon City’s 3rd district but was defeated by movie actor Dennis Roldan. The seat was eventually held for most of the next 15 years by another political family.

“I learned that our people were not yet ready for true-blue platform-based elections, that instead of changing, our political landscape was evolving into what is now in place, which is based on popularity and name recall. There is no discussion of platforms at all, which is sad,” he said.

Penson also blames political parties for focusing on how to get votes rather than strengthening political platforms.

He rejects the argument that even the United States supposedly also has political dynasties.

“It’s really crazy to compare us with America. The Bushes have always been Republicans, the Kennedys have always been Democrats, they never switch parties, they always carried the platform of the party. But here it’s a different story. Political dynasties are the party,” he said.

Penson later busied himself with his business ventures, concentrating on infrastructure projects. He is the chair and chief executive officer of Ausphil Tollways Corp., the private proponent of the multibillion-peso North Luzon East Expressways (NLEE) project linking Metro Manila to Cagayan Valley.

He is also president of Philco Aero Inc., the private proponent of the Clark International Airport Terminal 2 project; chair and CEO of Penson & Co. Inc., which is engaged in infrastructure projects related to renewable energy; and executive committee chair and director of Defense Resources Inc., a contractor of the Armed Forces of the Philippines.

Penson is also director of RP Studios Inc., an independent film producer and advertiser, and of the Stallion Football Club, one of the original football clubs in the United Football League under the umbrella of the Philippine Football Federation.

However, even as his net worth grew, Penson said he could not resist joining civic, social and political movements. He said it was the antipolitical dynasty cause that motivated him to run for public office again.

“I represent the change that was forthcoming for so many times in this country. I represent the people who are always left out every time we proclaim that there are changes in our nation,” he added.

Penson became a part of the show biz world when he married actress Dina Bonnevie in 1988. Their marriage was later annulled.

“People would still ask me about it but after a while, they are more interested in knowing what you have to say and what your platforms are. That’s already the past, she’s in a better place now and already remarried,” he said.

Earlier, in a television interview, he denied reports that he beat up his ex-wife and that this was the reason she sued for annulment. The Quezon City court that granted the annulment, however, ruled that it was Bonnevie who was psychologically unfit.

“I never did that (the beating). Court records are there, medical records. They’re public,” Penson said, adding that while he and Bonnevie say “hello” whenever they run into each other, he does not consider themselves friends anymore.

Penson said people also ask him about his relationship with his older sister, Margie Penson-Juico, the chair of the Philippine Charity Sweepstakes Office.

He said they have not been on speaking terms since the Aquino administration took office but they say “hello” when they see each other.

“We used to be very close. But there’s really no animosity. It’s just that we have very different opinions on a lot of things, especially since she joined the government. I have a very different view on how public service should be,” he said.

“She (Juico) is the only one in my family who does not profess support [for his candidacy],” Penson said.

He said he supported President Aquino’s presidential campaign in 2010 and even contributed money.

Penson admits to having spent almost P10 million in the campaign so far. He said he was only spending his personal money and does not want to solicit campaign funds from anyone “because we don’t intend to have any strings attached.”

His companies have supported his campaign by lending him a helicopter, a plane and even a boat so he can reach the more remote provinces.

He distributes buttons and whistles showing neither his face nor his name but the logo of the Krusada Kontra Dynasty.

Penson has gained the support of several party-list groups like the OFW Family, Ating Guro, Ang Nars and 1 BAP. He also has the endorsement of Sanlakas and Partido Lakas ng Masa. The Krusada Kontra Dynasty, which includes civil society leaders like Eddie Roces, is also supporting his Senate bid.

He has people campaigning for him in Muslim Mindanao, among them actor Robin Padilla. Penson said he met Padilla when the latter was incarcerated at New Bilibid Prison. Penson said he was teaching at a school for convicts set up by his father at the state penitentiary.

Penson said he supports the reproductive health law because it does not force abortion and does not coerce anyone to use contraceptives. He also supports the divorce bill but only for couples with serious and irreconcilable problems, not those that are petty.

He also backs a diplomatic solution to the Sabah claim and the West Philipine Sea dispute but warns against relying too much on the US for Philippine defense.

He said he would like to emulate the late senators Lorenzo Tañada and Jose Diokno, who defended the rights of the common man and were brilliant legislators.

On suggestions that he should have run for the House instead of the Senate, he replied: “I’m 60 now. My expertise is now more on issues and matters that can be held better in the Senate. I don’t want to be in a den with 240 rowdy people. I enjoy my peace at 60 so I think it’s more manageable in a group of 23 rowdy people.”

Asked if he may have reason to later regret spending his money on the senatorial campaign, he said:

“How can you regret something you do for the people? I can’t just give everyone money, that’s not teaching them how to fish. But I can bring the message to them and let them know the empowerment that is within their reach, but which they have not exercised. I think that’s payment enough, that’s very good compensation.”