US arrests include Philippine felons 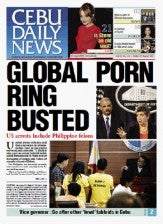 United States officials said they uncovered an international child pornography network and arrested 72 people who used an online bulletin board called Dreamboard to trade tens of thousands of images and videos of sexually abused children.

The Philippines was one of the countries where arrests were made, according to the Associated Press report.

Many participants in the network sexually abused children aged 12 and under produced images and video of the abuse and then shared it with other club members, according to court papers released in the case.

(No details about the Philippine arrests were stated in the AP report but cybersex crimes involving children have gotten high news attention since the June 1 raid of a low-income family in Cordova town, north Cebu. The parents were arrested in the act of directing their young children in a live sex show before a web camera.

(Prior to the raid, US Homeland Security agents assisted the National Bureau of Investigation [NBI] in Cebu monitor the online activities of the Cordova parents, who used several Internet accounts to reach paying clients abroad.

(The husband and wife, both unemployed, are on trial on non-bailable charges of human trafficking, child abuse and child pornography before the Regional Trial Court in Lapu-Lapu City.)

Of the 72 charged in the United States, 43 have been arrested in the US and nine abroad. Another 20 are known to authorities only by their Internet names and remain at large.

Authorities have arrested people in 13 other countries, including the Philippines.

The other countries were Canada, Denmark, Ecuador, France, Germany, Hungary, Kenya, the Netherlands, Qatar, Serbia, Sweden and Switzerland, but some of those were arrested on local rather than the U.S. charges.

At a news conference, the attorney general called the criminal activity a “nightmare” for the children and said that some of the children featured in the images and videos were just infants.

In many cases, the children being victimized were in obvious, and intentional, pain—even in distress and crying, just as the rules for one area of the bulletin board mandated, the attorney general said.

The U.S. indictments were unsealed in Shreveport, Louisiana.

To conceal their conduct, members used screen names rather than actual names and accessed the bulletin board via proxy servers, with Internet traffic routed through other computers to disguise a user’s location, according to the court papers.

Participants were required to continually upload images of child sexual abuse to maintain their membership.

A “Super Hardcore” section of the bulletin board was limited to posts showing adults having violent sexual intercourse with “very young kids” subjected to physical and sexual abuse.

Thirteen of the 52 defendants who have been arrested have pleaded guilty in the conspiracy. Of the four who have been sentenced, the least amount of prison time was 20 years behind bars and the most was 30 years.  AP