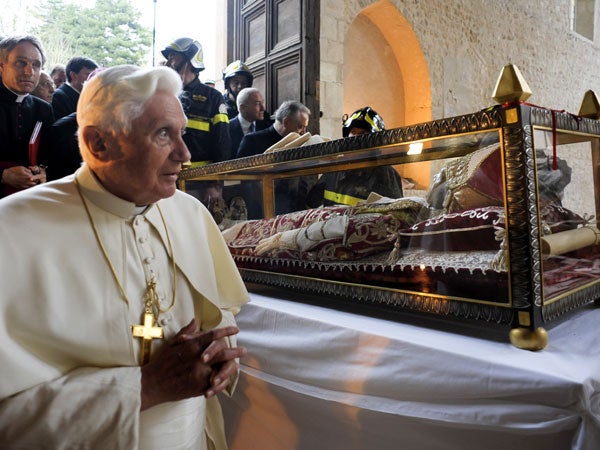 In this April 28, 2009 file photo provided then by the Vatican newspaper L’Osservatore Romano, Pope Benedict XVI stands by the salvaged remains of Pope Celestine V, in the 13th-century Santa Maria di Collemaggio Basilica, the symbol of the city of L’Aquila, whose roof partially caved in during the quake. Benedict XVI announced Monday, Feb. 11, 2013 that he would resign on Feb. 28 because he was simply too infirm to carry on – the first pontiff to do so in nearly 600 years. The decision sets the stage for a conclave to elect a new pope before the end of March. Pope Celestine V, the 13th-century hermit and saint, was one of the earlier popes to resign. (AP Photo/L’Osservatore Romano, file)

VATICAN CITY—The shy, retiring Pope Benedict XVI has much in common with 13th-century “humble hermit” Celestine V who quit the papacy after only five months, fed up with Vatican machinations.

Celestine set a precedent for Benedict as the only other pope to resign of his own free will, as well as one who accepted the job with great reluctance.

“I asked myself, where will I find the knowledge, the wisdom and the experience that I lack? Whom can I trust in the Roman Curia?” he asked, according to historian Ignazio Silone.

Cardinal Joseph Ratzinger, too, gave every impression of the reluctant pontiff.

Just two days after his election in 2005 he likened the enormous responsibility before him to capital punishment — to a “guillotine falling”.

“The thought of the guillotine came to me, there now it is falling and hits you,” he later told German biographer Peter Seewald.

Celestine V, or Pietro del Morrone, had been a Benedictine monk, renowned for renouncing worldly goods for an ascetic life in a mountain cave in the Abruzzo region of central Italy.

After the death in 1292 of Pope Nicholas IV, the cardinals of the time — just 12 of them — could not reach agreement on a successor.

As their dithering went into a second year, Del Morrone beseeched them in a letter to end their bickering for the good of the Church.

His reward was to be chosen himself — becoming one of only six non-cardinals to serve as pope in the Church’s 2,000-year history.

Benedict, who has always expressed admiration for the ascetic life, twice paid homage to Celestine.

After the 2009 earthquake in the Abruzzo capital L’Aquila, Benedict visited the heavily damaged Basilica of Collemaggio, which houses relics of the 13th-century pope.

He laid the traditional “pallium” he wore for his enthronement — a band of cloth placed over the shoulders of a new pope — over Celestine’s remains.

The following year in nearby Sulmona, Benedict said of Celestine: “More than 800 years have passed since (his) birth, but he lives on in history on account of the well-known events of his pontificate.”

Praising Celestine as “a man who sought the answers to the great questions of our existence”, he said his predecessor “went in search of God, and in order to hear God’s voice decided to detach himself from the world and live as a hermit.”

In today’s world, Benedict said: “It seems that every space, every moment must be filled with projects, activities and noise; there is often no time even to listen or to converse.”

Benedict’s older brother Georg Ratzinger said Benedict had dreamed of retiring from the Curia to write theological tomes but was instead elected pope at age 78.

Vatican expert John Allen of the National Catholic Reporter noted that as Joseph Ratzinger the future pope had twice sought permission to quit his post as the head of the Vatican’s doctrinal enforcement department, the Congregation for the Doctrine of the Faith, which he held for 24 years.

“He wanted to head the Vatican library and putter around with books,” Allen told AFP. “The second idea was to go home to Regensburg (the German university town where Ratzinger taught theology). He was clearly not scheming to take over the papacy.”

Celestine, shortly after taking up the chair of St. Peter, issued a decree declaring it possible for a pope to resign, opening up the way for his own departure.

He told his cardinals in a consistory — the same platform chosen by Benedict — that he wanted to regain his “lost tranquility”.

The move sparked howls of protest and derision, with Italian poet Dante Alighieri famously condemning him in “The Divine Comedy” to spend eternity in hell’s antechamber for his “cowardice” in making “the great refusal.”

Unlike Celestine, who was imprisoned by his successor Boniface VIII and died in captivity, Benedict will live out his years in quiet contemplation and prayer in a monastery within the Vatican walls.

At least Celestine did not suffer the fate that Dante prescribed for his afterlife. He was made a saint in 1313.