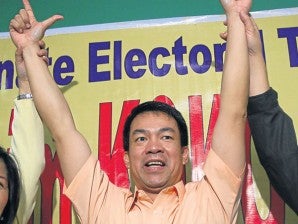 Was it truly a sacrifice, or he just knew what was coming?

Juan Miguel “Migz” Zubiri has drawn praise from both sides of the political fence for resigning his post as senator. But according to former Sen. Aquilino Pimentel Jr., the father of Aquilino “Koko” Pimentel III who has doggedly contested Zubiri’s victory in the 2007 senatorial race, he simply decided not to delay the inevitable.

Justice Secretary Leila de Lima, who earlier served as Koko Pimentel’s election lawyer, said that while the majority praised Zubiri for resigning, “we should dig deeper (and) be more discerning about his real motives.”

She said Zubiri’s decision to quit was a “good political strategy.”

“Koko clearly won,” the elder Pimentel on Thursday told the Inquirer, pointing out that as of the last count of the Senate Electoral Tribunal (SET), his lawyer-son was leading Zubiri by 257,000 votes.

“The indications are that the SET will rule in favor of Koko Pimentel,” SET secretary Irene Guevarra said in an interview, citing Pimentel’s lead of “almost 200,000 votes.”

“He will be proclaimed senator,” Guevarra said.

Sen. Edgardo Angara, a member of the SET until last month, said the young Pimentel could formally assume office in mid-August.

“This process may take about two weeks. That’s an educated guess,” Angara said.

On Thursday the Senate transmitted a letter informing the SET that Zubiri had “submitted his resignation as senator of the republic.”

Zubiri also withdrew his counterprotest at the tribunal, paving the way for it to issue its resolution on the main case, Koko Pimentel’s protest.

The source said Zubiri appeared to have drawn the Palace’s ire when he opposed its effort to postpone the elections in the Autonomous Region in Muslim Mindanao (ARMM).

At the height of the Senate deliberations on the postponement, Zubiri was said to have met with Ronald Llamas, the President’s adviser on political affairs, and was greeted with: “Anong gusto mo? Mabilis o mabagal (How do you want it, quick or slow)?”

Llamas seemed to be referring to the resolution of Pimentel’s election protest against Zubiri at the SET, according to the source, who asked not to be named for lack of authority to speak on the matter in public.

“It was an unusual greeting and Migz was taken aback,” the source told the Inquirer. “Here was a Palace official talking in that manner to a senator, an elected official.”

The source said Zubiri’s camp interpreted the message as a veiled threat to force him to change his position on the ARMM elections. But the senator went on to deliver a strongly worded privilege speech against the postponement.

Recently, the source said, Zubiri got word that the Bureau of Internal Revenue was looking into his family’s businesses and properties in Bukidnon province, in a purported effort to build a possible tax evasion case.

“This is too much. They’re like the Mafia,” the source quoted Zubiri as saying.

Asked on Thursday about the alleged pressure from Malacañang, Zubiri said: “Let bygones be bygones. I’m a civilian now and I want to put everything behind me.”

“Absolutely,” he said when asked if he would cooperate with the joint inquiry of the Department of Justice and the Commission on Elections into the purported fraud in the 2004 and 2007 polls.

Zubiri maintained, however, that he had no firsthand information on whether Arroyo and members of her family had any involvement. He said he distanced himself from Arroyo’s ticket in the latter part of the 2007 elections.

But he added that he did not regret joining Arroyo’s senatorial lineup: “It was a decision I made. It was a risk I took.”

Llamas is currently in the United States. At press time, he had yet to respond to a request for comment from the Inquirer.

As Zubiri promised when he announced his resignation on Wednesday, his lawyer George Erwin M. Garcia formally moved to withdraw his counterprotest at the SET shortly before 2 p.m. Thursday.

Garcia said Zubiri’s camp would not object to Pimentel sitting in the Senate if he would be proclaimed winner by the SET.

“Whatever is the decision—for instance, Pimentel is proclaimed winner—we will definitely respect it and be the first to commend the tribunal,” Garcia told reporters. “If the tribunal rules that we won, we can’t go back anymore because we have resigned.”

With the filing of the motion to withdraw, Guevarra said the SET deemed Zubiri’s counterprotest terminated, and would proceed to issue a resolution on Pimentel’s protest in two weeks or a month.

“There’s no more hindrance for the tribunal to render its decision on the protest of Attorney Pimentel,” she said.

Had Zubiri not filed the motion to withdraw, the tribunal would have taken at least six more months to revise 8,000 ballots, receive evidence from both camps, and “appreciate ballots” in the counterprotest, Guevarra said.

“This expedited the process,” she said.

The SET wrapped up its proceedings on Pimentel’s protest before moving to do a recount of Zubiri’s votes after the latter filed a counterprotest.

“We actually finished revising all the ballots contested by Pimentel in his protest. On the basis of that, Pimentel having shown that his case has merits, the tribunal looked into Zubiri’s counterprotest. We finished the 25 percent, and went ahead with 75 percent of the counterprotest areas,” Guevarra said.

She said that at the time Zubiri filed his motion to withdraw, the tribunal was in the middle of revising ballots in 75 percent of the “counterprotest areas.”

The mere fact that the SET tackled Zubiri’s counterprotest showed that “there was merit in the main case,” Guevarra said, referring to Pimentel’s protest.

“Pimentel leads Zubiri by around 200,000 votes, more or less,” she said of the SET’s recount of 100 percent in the protest areas.

Guevarra said the tribunal was “relieved” that Zubiri had resigned and withdrawn his counterprotest.

“It’s the honorable thing to do,” she said of the resignation. “We were relieved in the sense that we didn’t have to continue the tedious process of collection and revision of ballots. Now we can render a decision on the main protest earlier than expected.”

Zubiri’s lawyer, Garcia, said the motion to withdraw was consistent with his client’s announcement.

“We wanted to expedite everything,” the lawyer told reporters. “I wanted to make it clear to the Filipino nation that had Zubiri not resigned, or not withdrawn the counterprotest, the process would take one more year.”

Under SET rules, Zubiri may present evidence in the counterprotest for “one year” and Pimentel may do the same, Garcia said.

“That could have lasted up to January 2013. So with all due respect to what they’re saying that we resigned because of a forthcoming decision, that’s not true,” he said.

By withdrawing the counterprotest, Zubiri is waiving further participation in the SET proceedings, and manifesting that he has resigned as a senator, Garcia said.

Angara said that after Zubiri’s resignation and the withdrawal of his counterprotest, the SET will issue a resolution approving the withdrawal.

“Since there would no longer be any counterprotest, the protest of Mr. Pimentel would be upheld. After this resolution, it will go to the Commission on Elections, which will proclaim Mr. Pimentel as the winner,” he said.

Angara said that prior to Zubiri’s resignation, he had advised the latter “to do what he felt was right.”

“I actually admire his resolve, his commitment and his integrity. I don’t doubt that this has been a difficult week for him,” Angara said.

Sen. Gregorio Honasan, a member of the SET, said Zubiri’s resignation should be seen in the larger context of electoral reforms.

“Our gains here will be measured through electoral reforms—that, to me, is the crux of the matter,” he said. With a report from Nikko Dizon