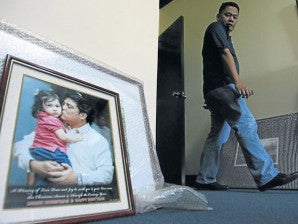 PACK UP. A staff member of Juan Miguel Zubiri walks past a framed picture of the resigned senator on the floor leaning against the wall of his Senate office. LYN RILLON

While his colleagues in the Senate were not entirely clueless about Juan Miguel Zubiri’s planned resignation, they found themselves without specific rules on how to handle it and were forced to formulate a policy right after his announcement.

Senate Minority Leader Alan Peter Cayetano said he and his colleagues agreed that “any resignation in the Senate is irrevocable” during a caucus held right after Zubiri’s resignation speech.

“[We] decided we should not take it upon ourselves whether to accept or not to accept a resignation. We should just take it at face value. Once you resign, that’s it,” Cayetano said at the Kapihan sa Senado forum on Thursday.

Senate President Juan Ponce Enrile said in an ambush interview that the chamber would “remove [Zubiri] from the rolls and then inform the SET (Senate Electoral Tribunal) about it.”

This means that Zubiri’s name will no longer be called when the Senate secretariat records attendance at the start of a session.

But Sen. Miriam Defensor-Santiago said Zubiri should “return to work” until his resignation had been formally accepted by the chamber.

She warned that Zubiri would risk committing the crime of “abandonment of office” should he stop reporting for work at this time.

“The penal code prohibits the crime of abandonment of office,” Santiago said in a statement. “It is committed by any public officer who, before the acceptance of his resignation, shall abandon his office to the detriment of the public service.”

Santiago said Zubiri’s decision to step down merely translated to “a courtesy resignation.”

She cited a Supreme Court ruling that states: “A courtesy resignation cannot properly be interpreted as a resignation in the legal sense if it is not necessarily a reflection of a public official’s intention to surrender his position.”

Santiago said Zubiri should continue performing his functions as a senator until the SET had resolved the election protest against him and declared Aquilino Pimentel III the real winner of the 12th slot in the 2007 senatorial race.

“If Zubiri leaves office, and Pimentel is not yet declared the winner of that office, the position of senator will remain vacant, causing detriment to the public service,” she said.

She added that the Senate’s acceptance of Zubiri’s resignation would be completed only with the issuance of a notice of acceptance.

According to Commission on Elections Chair Sixto Brillantes Jr., Zubiri may seek election in 2013 and reelection in 2019 without violating the constitutional prohibition on senators serving more than two consecutive terms.

Pimentel, on the other hand, may run for reelection in 2013 but is forbidden from doing so in 2019.

If Pimentel is proclaimed as Zubiri’s replacement, it is he who will be considered to have served one term as senator, and not Zubiri, Brillantes, a veteran election lawyer, said in an interview.

In a number of TV interviews, Zubiri said he was open to running for the Senate in the May 2013 midterm polls.

Senators serve six-year terms. Every three years, half of the 24 Senate seats are vacated.

Article VI, Section 4 of the 1987 Constitution states: “No senator shall serve for more than two consecutive terms.”

Only two election protests in the Senate have succeeded, according to the Senate website and Comelec records.

The two cases took place in the early years of the Third Republic, when the Senate was composed of 16 seats, with each senator serving four-year terms.

In April 1953, the SET ousted eighth-placer Teodoro de Vera (Liberal Party) and replaced him with ninth-placer Claro M. Recto (Nacionalista Party), who claimed to have won in the November 1949 Senate race.

In December 1949, the SET installed another Nacionalista candidate, Eulogio “Amang” Rodriguez Sr., the 10th-placer, and ousted eighth-placer Liberal Carlos Tan, who had earlier been proclaimed among the winners of the November 1947 elections.

Rodriguez sued Tan to recover the salaries and allowances he received during his “usurpation.” But the Supreme Court ruled in 1952 that while Tan was in the Senate, he was entitled to his pay and other privileges in the performance of his duties.

Cayetano said many of those present when Zubiri announced his resignation on Wednesday agonized over the “damned-if-you-do, damned-if-you-don’t” predicament into which his move put them.

“Who wants to accept the resignation of a colleague? We live in a society of extended families, and whether you agree politically with [your colleagues] in the chamber, you see him every day and your [acceptance of his resignation] will have consequences,” Cayetano said.

He added: “If you vote not to accept, the public will accuse us of doing a moro-moro (stage show) and accuse us of injustice. Senator Zubiri’s… unselfish act would be tainted because his colleagues refuse to accept the resignation. That’s why the agreement was: Once resigned and it [is done] in writing, let’s consider that resigned.”

Cayetano noted that neither the Constitution nor the Senate rules explicitly provided for the resignation of a lawmaker.

“The framers of the Constitution did not contemplate this situation. [Perhaps] it did not want to deal with this situation where a member of Congress resigns, and left the Senate or the House to pass its own rules,” he said.

No need to accept

Cayetano said it was also “not clear in any law … who should accept, or whether there is a need to accept, [a lawmaker’s resignation].”

“If we accept the resignation, we admit we have the power to [do so] and set this as a precedent. We voted not to vote to accept. We had a consensus that when someone resigns, there should be no need to accept. In effect, any resignation in the Senate is irrevocable,” he said.

Another thing, Cayetano said: He and his colleagues in the minority agreed that Zubiri had made known his intention to leave the Senate and let the SET resolve the election protest filed against him by Pimentel.

“We looked at intent, and Senator Zubiri’s intent was to let the legal process move on, to let the SET decide, and not to hold on to his Senate seat to free him and his family from more stress and frustration,” Cayetano said. With reports from Jerome Aning and Christian V. Esguerra