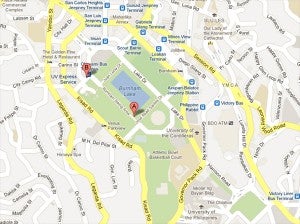 MANILA, Philippines — Three persons were wounded after a grenade exploded in Melvin Jones Grand Stand, Burnham Park in Baguio City Sunday morning, a report on Radyo Inquirer 990AM said on the same day.

The report said a man allegedly threw a grenade at the office of the Baguio Civilian Volunteer Against Crime (BCVAC) past 7.a.m.

The victims, who were not identified, were immediately brought to the Baguio General Hospital.

Authorities are still investigating the blast which took place towards the end of the annual Penagbenga Festival in the city.