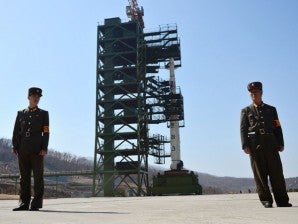 SEOUL – North Korea has awarded state medals and other honours to thousands of scientists and workers behind its recent nuclear test, state media said.

State decorations, medals and other benefits were given to 11,592 scientists, technicians, workers and other officials for their contribution to the February 12 atomic test, the Korean Central News Agency reported Saturday.

The nuclear scientists and other officials who worked on the test however received a hero’s welcome in Pyongyang last week when they won a trip to the capital.

Residents turned out in throngs along the route with bouquets, banners and posters to give a “hearty welcome” and top officials including ceremonial head of state Kim Yong-Nam visited them at a hotel to offer congratulations.

“They are now spending pleasant days in Pyongyang, given greatest favour and privilege,” KCNA said.

The top officials praised the scientists and workers as “genuine patriots” and urged them to further develop nuclear technology to make the North “a matchless nuclear weapons state”, it added.

The impoverished but heavily-militarised North’s nuclear test was its most powerful to date, with Pyongyang claiming a breakthrough with a “miniaturised” device.

While the outside world was united in condemnation, the test triggered days of orchestrated celebrations and mass rallies in the isolated communist state.

The test followed a December rocket launch seen by the UN Security Council as a disguised ballistic missile test which could help Pyongyang develop a long-range missile potentially capable of reaching the US mainland.

North Korean leader Kim Jong-Un had also awarded state medals and other benefits to the hundreds of scientists who worked on the rocket launch.