Miriam is back to ‘expose sins of Pinky Lacson’ 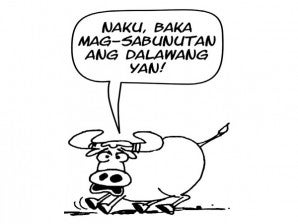 If she is called to begin serving in the International Criminal Court, Sen. Miriam Defensor-Santiago will ask for a delay of one month because she needs time to rake up and expose all the sins of “Pinky Lacson.”

“Be ready, because I have parliamentary immunity. I will expose all of your sins, including your sexuality,” Santiago said in Filipino on Radyo Inquirer 990AM Wednesday morning, referring to Sen. Panfilo Lacson.

Reached for comment, Lacson said: “I’m sorry to disappoint the lady senator. If she’s insinuating some lunatic idea about my sexuality, let me emphasize this: I am not gay and I don’t intend to be one.”

Santiago and Lacson have been clawing at each other in recent weeks in a controversy involving the alleged misuse by Senate President Juan Ponce Enrile of the chamber’s savings for 2012.

Instead of returning the savings to the National Treasury, Enrile gave the money away to his allies in the form of additional operational budget.

Enrile gave P1.6 million to his allies, but only P250,000 to his four critics, Senators Pia and Alan Peter Cayetano, Antonio Trillanes IV and Santiago.

Enrile’s allies, including Lacson, defended Enrile, who claimed he had the authority to decide what to do with the Senate’s savings.

At one point in their exchanges, Lacson called Santiago a “crusading crook,” alleging that Santiago uses Senate funds to pay rent on space that serves as her extension office in a building that her family owns.

That sent Santiago’s blood pressure shooting up to the stratosphere. She went on leave from the Senate and was later diagnosed with bone marrow disorder.

But she’s coming back in June, she said, to answer all of Lacson’s allegations.

She has an advantage, as Lacson’s term ends in June. He leaves when the 16th Congress sits in July.

Santiago will continue to serve in the 16th Congress unless, she said, called early by the ICC, to which she was elected in December 2011. But she will ask for a delay of one month to answer Lacson’s charges.

“You are no longer a senator so you have no more parliamentary immunity. If you say something in public against me, I’ll sue you for libel,” Santiago said.

She admitted using her budget to pay P70,000 in rent for her extension office in a building owned by her family.

But she said it was the Senate secretariat itself that had told her she could use Senate funds to pay the rent.

Besides, she said, other senators also rent offices in buildings they own.

“Other senators are doing that. I’ve done that before so what’s my fault now, giving the government a bargain?” Santiago said.

“So I will answer that Pinky Lacson. And not only that, I will also rake up his sins, from A to Z,” she said.

“I don’t know what to call him,” she said. “Some people call him Ping Lacson, others call him Pinky Lacson,” Santiago said. “Pinky, that’s right! Hi-hi-hi-hi!”