MANILA, Philippines – Senator Miriam Defensor-Santiago is back with a strong warning that she would reveal all the “sins” and “sexuality” of her nemesis, Senator Panfilo “Ping” Lacson, whom she called “Pinky” Lacson.

When sought  for reaction, Lacson denied  Santiago’s insinuation about his sexuality.

“I am sorry to disappoint the lady senator. If she’s insinuating some lunatic idea about my sexuality, let me emphasize this—I am not gay and I don’t intend to be one,” Lacson told INQUIRER.net in a text message. 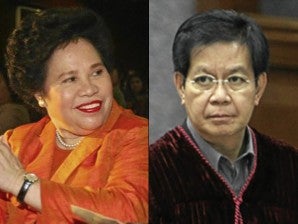 Santiago, who has been on  sick leave from the Senate, said she  would return  to the Senate when sessions resume in July to answer  Lacson’s allegation that she was using  the Senate fund to pay for   the rent of her   extended  office in a building that she herself  owned.

Santiago admitted  that she used  her budget  in the Senate to pay  the  P70,000 rent of her office in the building in question.

But  it was  the Senate Secretariat, she said, who  told  her that she  can  use the  Senate  fund to pay the rent.

(This is what the Senate secretariat had told me: ‘…ma’am, it can be done.’ Then I said I’m the owner and can I be the tenant? Then they said yes because there’s a way. I will not be the signatory but the Senate President. We call it office manager.)

Santiago said the  money  she  used   to pay  the rent of a 450-square-meter office  in  her own  building  came from the P2.2 million allocated for each senator, half of the amount went to the salaries of the staff.

(Well you see the Senate does not own a building.  The space given to senators is too small. We were given P2.2 million, half of the amount goes to the staff. So you’ll have P1.2 million that can be used for salaries every month, meaning you are allowed to have a bigger staff. It should be because you will a lot of things to research.)

(So let’s say each senator perhaps has 30 to 40 staff…they will not fit in the rooms provided by the Senate.)

Besides, Santiago said, other senators were also renting  offices  that they owned. She declined to identify her colleagues who were doing the same thing.

“Ngayon ginagawa ng ibang senador yan. Ginawa  na yan noon. Ano ngayon ang kasalanan ko at binibigyan ko pa ng bargain ang gobyerno? (Other senators are doing the same thing now. I have done that before. What have I done wrong? I even gave the government a bargain),” Santiago said.

“Kaya sasagutin ko si Pinky Lacson na yan at hindi lamang iyan, kakalkalin ko isa-isa from A to Z ang kasalanan nya (So I’ll get back at Pinky Lacson and not only that, I’ll dig up all his sins from A to Z ),” she added.

(Oh he’s lucky. But that’s only his propaganda so he  won’t lose supporters because you know people tend to say that if you lose your government position you will have no more friends.)