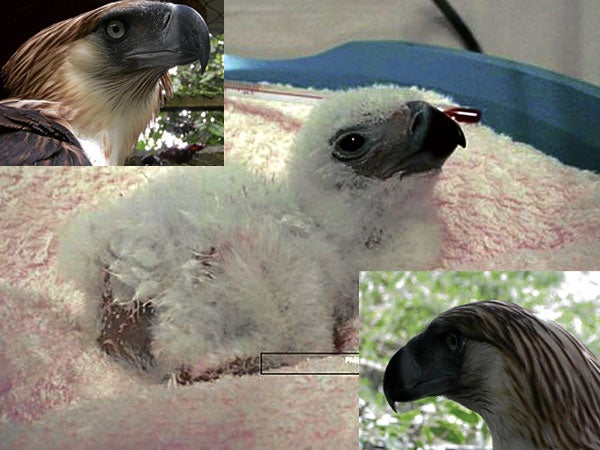 NAME THE YOUNGEST PHILIPPINE EAGLE The Philippine Eagle Foundation breeding facility in Davao City has a new resident, a 5-day-old Philippine eagle, the 25th to be hatched in the facility. The eaglet’s parents are Pag-asa (father) [right] and Kalinawan (mother) [top left]—both born in captivity in Barangay Malagos in Calinan District. PHILIPPINE EAGLE FOUNDATION

DAVAO CITY—The country’s first Philippine eagle to be hatched and bred in captivity is now a father.

The eaglet sired by Pag-asa was hatched at 1:55 a.m. on Saturday at the breeding facility of the Philippine Eagle Foundation (PEF) in Barangay (village) Malagos in Calinan District here.

The Philippine eagle (Pithecophaga jefferyi) is considered a highly endangered species because of its rapidly declining population. At least 400 pairs remain in the wild, according to estimates from government and private conservation groups.

Still unnamed, the new eaglet is healthy and the 25th to be hatched from the center’s conservation breeding program. It is the offspring of Pag-asa and Kalinawan.

PEF officials said it would take two years to determine the sex of the eaglet.

Salvador considered the successful hatching another milestone in the center after Pag-asa, the first Philippine eagle to be produced as a result of the PEF’s breeding program in 1992.

“This accomplishment underscores the fact that breeding these birds in captivity remains difficult. We are certainly a long way off in coping with losses in the wild,” he said.

“The Philippine eagles and their forest habitat continue to be imperiled by manmade activities like logging, mining and other development projects,” Salvador added.

Anna Mae Sumaya, PEF curator for conservation breeding, said the eaglet hatched from a breech position. Experts use the term “breech” to refer to a baby to be delivered “who is not in a head down or vertex presentation.”

“I had to help it to avoid damaging the vital veins that could potentially cause its death,” Sumaya said.

The foundation is looking for partners to support the new eaglet, Salvador said.