Misuari to Abu Sayyaf: Enough, we cannot tolerate you forever 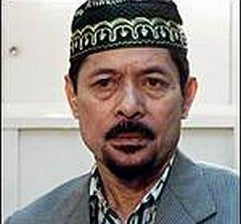 MANILA, Philippines – Moro National Liberation Front Chairman Nur Misuari denied Saturday that he ordered MNLF forces to attack the Abu Sayyaf  but said he supported the deciksion of one of his commanders in Sulu to do so because it was time to eradicate the bandit group once and for all.

Speaking to reporters at the Ninoy Aquino International Airport upon his arrival from Qatar, Misuari said MNLF troops in Sulu under Ustadz Habier Malik were forced to retaliate and mount a full-scale attack after the bandit group ambushed a group MNLF soldiers.

“We are going to wipe out all traces of kidnapping in our areas. Our people have been waiting for years on end for positive action on the part of the Armed Forces of the Philippines or the Philippine government because we don’t like to harbor these criminal activities in our homeland because this is against the law of God, the law of Islam, the law of Koran. This is intolerable, this is unacceptable,” Misuari said.

Misuari said the MNLF leadership would no longer tolerate the Abu Sayyaf using Sulu as a haven for “criminal activities,” victimizing locals and foreigners alike.

He said he would “make inquiries” from his officers in the field if Jordanian Baker Abdulla Aytani and other foreign hostages had been rescued by the MNLF troops overran at least two Abu Sayyaf camps last Sunday.

“Before I left, I sent very, very influential persons to their (Abu Sayyaf’s) camp to tell them to release him and not use Sulu as haven for criminal activities. [I told them], if they do not listen to us, one day you will be sorry because none of our people, none of our commanders will tolerate this,” Misuari said.

He reiterated this message to the Abu Sayyaf on Saturday: “We are trying to tell the whole world that we are fighting for a civilized, legitimate cause and here you are shaming and demonizing us. We cannot tolerate you forever.”

Misuari claimed that when he was governor of the Autonomous Region in Muslim Mindanao he would have put an end to the kidnappings but government agents coddling the bandits conspired to oust him from office instead.

He charged that the Abu Sayyaf’s activities were being tolerated by the government to justify military operations in Mindanao and to portray the island as a dangerous area before the world so that businessmen and tourists would stay away and Manila could continue the “colonial milieu” in the Bangsamoro homeland.

“Many of the kidnapers are agents of the Philippine Armed Forces, the government. They kidnap inside the city and then turn them (victims) over” to the Abu Sayyaf, Misuari said, adding that this was so because the bandit group’s leader, Radullan Sahiron, “cannot go to the city, he would be arrested by the military, the police and our people.”

Misuari also vented his ire on Malaysia, which he accused of conniving with the Philippine government to enter into a “fake” peace agreement with the Moro Islamic Liberation Front—a breakway faction of the MNLF— in return for contracts to extract natural gas from the Liguasan Marsh. He said the Bangsamoro’s natural resources were being “stolen” from the people.

Misuari led a five-member delegation to a conference of parliamentarians and the leaders’ summit of the Organization of Islamic Cooperation in Khartoum, Sudan and Cairo, Egypt, respectively. He was accompanied by his wife Tarhata Ibrahim-Misuari; Dr. Mashur Bin-Ghalib Jundam, head of the MNLF peace panel secretariat; Bilgadil Albani, director-general of the MNLF in the Middle East; Abdulkarim Tan Misuari, MNLF chief liaison officer in the Gulf States and information minister Mohammed Deen.

He said he was able to obtain a commitment from leaders and lawmakers from OIC-member countries, as well as the new OIC secretary-general, former Saudi Arabian information minister Iyad Madani, for “holistic autonomy” for Mindanao.

The MNLF is recognized by the OIC as representative of Muslim Filipinos in the global organization.

Read Next
Liberal in domestic issues, Obama a hawk on war
EDITORS' PICK
Heads may roll at BOC, says Palace if sugar smugglers are allowed to use recycled import permits
Palace: Biggest supermarkets in PH commit to sell sugar at P70 per kilo
What to watch out for when selecting a video surveillance solution
House energy committee chair Arroyo bats for cheap electricity
vivo brings to the Philippines a powerful smartphone with a slimmer body, the vivo Y02s for only PHP 6,499
DOH reports increase in daily COVID-19 deaths, mostly unvaxxed
MOST READ
Metro Manila’s No. 1 wanted man arrested, says NCRPO
Brian Poe-Llamanzares receives his PhD in Public Administration
Alyssa Valdez to miss Creamline’s AVC Cup campaign
Mayor bares issues vs closed QC school
Don't miss out on the latest news and information.