Liberal in domestic issues, Obama a hawk on war 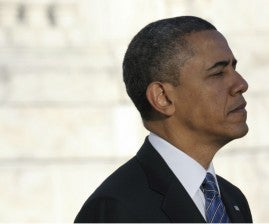 WASHINGTON—For all of his liberal positions on the environment, taxes and health care, President Barack Obama is a hawk when it comes to the war on terror.

From deadly drones to secret interrogations to withholding evidence in terror lawsuits, Obama’s Democratic White House has followed the path of his predecessor, Republican President George W. Bush. The US detention center at Guantanamo Bay, Cuba, remains open, despite Obama’s pledge to close it, and his administration has pursued leaks of classified information to reporters even more aggressively than Bush’s.

“They have maintained momentum in a lot of important areas that we were focused on, and they’ve continued to build in those areas,” said Ken Wainstein, the White House homeland security adviser and a top Justice Department lawyer under Bush. “You can see an appreciation for the severity of the threat, the need to stand up to it, and the need to go on offense at times.”

John Brennan’s confirmation hearing this week to be CIA director showed just how much Washington — and especially Democrats — has come to accept the same counterterrorism policies that drew such furor in the first years after the terrorist attacks of September 11, 2001.

Brennan refused to call waterboarding a form of torture but called it “reprehensible” and, if CIA director, said he would not allow it. He also said he didn’t know whether any valuable information was gleaned as a result. His more than three hours of testimony was received by a mostly friendly panel of senators, and his confirmation is expected to move forward soon.

In October 2007, by contrast, Bush’s attorney general nominee, Judge Michael Mukasey, called waterboarding “repugnant” but also refused to say whether it was torture. His confirmation was delayed for three weeks and nearly derailed. No one expects Brennan not to be confirmed.

White House spokesman Tommy Vietor said Obama has stopped or softened a number of Bush’s security tactics, including ending harsh interrogations, closing secret prisons and, overall, trying to be more transparent about counterterror policy. But he noted that Obama has delivered on his campaign promises to kill or capture Osama bin Laden, take the battle to al-Qaida in Pakistan in Yemen before its members can attack the U.S., and to end the war in Iraq.

“Yes, we’re still fighting al-Qaida, but I think there are very few people who would take issue with that,” Vietor said Friday. “This president does what he says he’s going to do, and I think that’s noticed around the world.”

Obama’s embrace of many of Bush’s counterterror policies did not hurt him in his re-election bid last year. In one key rejection of Bush’s legacy, Obama repeatedly has said he believes waterboarding — the interrogation tactic that simulates drowning — is torture and illegal and that it will not be used under his watch. But Brennan, a career CIA officer who has served as Obama’s top counterterrorism official since 2009, told the Senate Intelligence Committee on Thursday that because he was not a lawyer he could not answer whether he personally believes waterboarding is torture. The CIA waterboarded at least three al-Qaida detainees before the tactic was banned in 2006.

The parallels between Obama’s and Bush’s security policies were on sharp display in the run-up to Brennan’s hearing over the use of deadly drones to kill suspected terrorists, including U.S. citizens, overseas.

A newly surfaced Justice Department memo from 2012 outlined the Obama administration’s decision to kill al-Qaida suspects without evidence that specific and imminent plots were being planned against the United States. At Thursday’s hearing, Brennan defended the missile strikes by the unmanned drones, saying they are used only against people who are considered active threats to the U.S. — and never as retribution for earlier attacks.

In a way that Bush did not, Obama has sought congressional approval of laws that he then uses as the basis of many of the counterterror policies he has carried over from his Republican predecessor. He successfully lobbied Congress three times to renew the controversial USA Patriot Act, the 2001 law that lets the government put roving wiretaps on US citizens’ phones with a secret court order and obtain other personal and financial records with no judicial approval at all.

White House spokesman Jay Carney defended the deadly strikes as legal under a 2001 law authorizing the use of military force against al-Qaida. CIA drones also have been used in attacks, including the 2011 killing in Yemen of US citizen Anwar al-Awlaki, a cleric with suspected ties to at least three attacks planned or carried out on US soil: the Fort Hood, Texas, shooting that claimed 13 lives in 2009, a failed attempt to down a Detroit-bound airliner the same year and a thwarted plot to bomb cargo planes in 2010.

But Congress has grown increasingly uneasy with at least some of the authorities. Democratic Rep. Barbara Lee of California, a staunch Obama supporter, calls the military force law “overly broad” and has been seeking to overturn it for years.

“He’s got to end that,” Lee said. She described a “huge difference in policies” between Obama and Bush but added: “I respectfully disagree on some, including the use of that (use of force) resolution, and that would not matter who was president. That resolution is there until we repeal it, and I want it repealed if we’re going to end this state of perpetual war.”

Lee is among the dovish Democrats who also are displeased with Obama’s decisions to surge U.S. troops to Afghanistan in 2009 and lead NATO military airstrikes at the height of the Libyan crisis in 2011. But, in a testament to his case-by-case deliberations on foreign policy and national security, Obama refused to similarly intervene or arm rebels in Syria and opposes a near-term military strike on Iran. He also ended the U.S. war in Iraq by withdrawing all Americans troops by the end of 2011 as promised.

Determined to not bring any terror detainees to Guantanamo Bay, the government has begun interrogating suspects on Navy warships before they are given a chance to speak to a lawyer. The information gleaned from those interrogations, including in the case of al-Shabab operative Ahmed Abdulkadir Warsame, is not allowed to be used in court but it can be used to pursue others. And the FBI can later question the terror suspects. Al-Shabab is a Somali-based terror group that has been linked to al-Qaida.

The Obama administration also has fought for, and won, the right to withhold evidence in terror lawsuits that it says could threaten US security. The use of the so-called state secrets privilege gives the president limitless power to keep information from becoming public and hampers court oversight in cases that could be embarrassing to the government.

Critics say Obama’s use of the state secrets privilege represents a surprising reversal by the constitutional lawyer-turned-president and threatens American civil liberties. Last month, a federal judge in New York chided the Obama administration for refusing to turn over documents in a case relating to al-Alwaki’s killing but said she had no authority to order them disclosed.

More than any other president in US history, Obama has invoked the Espionage Act to prosecute government officials accused of leaking classified information to reporters. His administration has used the law six times in leak investigations since 2009 — compared with three since it was enacted in 1917.

“There has been a disturbing amount of continuity between this administration and the former one,” said Elizabeth Goitein, co-director of the Brennan Center Justice’s Liberty and National Security Program. The center is a civil liberties program at the New York University law school.

“There’s been way more continuity than I think anyone expected, and certainly than candidate Obama had led anyone to expect,” Goitein said. “I just think he put his tail between his legs — the national security establishment has become so huge and powerful that he’s probably gotten somewhat co-opted despite himself and despite his better judgments and inclinations.”

She noted that some of the most powerful players in Obama’s national security circle were holdovers from Bush’s administration, including Robert Gates, who served as defense secretary, FBI Director Robert S. Mueller and Brennan, who was a top CIA official until he retired in 2005.

In his closing remarks at Thursday’s hearing, Brennan somewhat emotionally described himself as someone who is neither Republican nor Democrat — but “who really understands that the value of intelligence, the importance of this intelligence, is not to tell the president what he wants to hear, not to tell this committee what it wants to hear, but to tell the policymakers, the congressional overseers what they need to hear.”

“It would be my intention to make sure I did everything possible to live up to the trust, confidence that this Congress, this Senate and this president might place in me,” Brennan said.