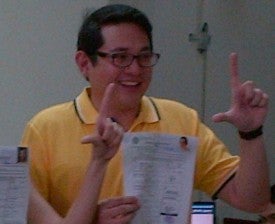 MANILA, Philippines – Despite being perceived as part of a political dynasty, especially with his cousin Benigno Simeon Aquino III holding the highest government position in the country, Paolo Benigno “Bam” Aquino IV would not disassociate himself from the family name as election campaign period draws near.

“I don’t think there’s a need to disassociate myself, in fact I tell people openly that Tito (uncle) Ninoy and Tita (aunt) Cory are my inspiration,” Aquino said in an interview during the launch of his “Bida Ang Mamamayan” movement Thursday.

“I mean these are people who gave their lives for the country, literally. Why should I be ashamed of that? I should be proud of that,” he said referring to the martyred senator Benigno Aquino Jr. and his wife former president Corazon Aquino.

Aquino is running for a senate seat in the May 2013 midterm elections under the Liberal Party, which is led by President Aquino.

Before deciding to run for the Senate, Aquino established the social enterprise Hapinoy in 2007. He had won several awards such as the Ten Outstanding Young Men of the Philippines in 2010 for Hapinoy.

“But of course, kailangan pa rin ipagpatuloy yung sariling gawa (there’s a need to continue self-sufficiency project) . I work on my own, and the things that I’ve done through the years, I did it on my own,” Aquino said.

“[Ninoy and Cory] played a very important role in my life … I am my own man and at the same time I pay homage to [the fact] that they gave so much to the country. It’s just right that I follow in their footsteps,” he added.

When asked why he decided to go into politics instead of just continuing with his social enterprise, Aquino said that he wants to serve as a “bridge” between government’s vast resources and the “people doing good things” in Non-Government Organizations (NGOs).

“The only way to be able to get the programs that I have seen that are successful to a higher level is if people in government are actually pushing for it,” he said.

“All the NGOs have many projects and many success stories but it’s always [only] in specific areas in specific provinces, it doesn’t get to the mainstream,” he added.

If he would remain in the private sector “it will be very hard [and] it will take a longer time,” for the NGOs to achieve success, he said.

“The government has so many resources and [NGOs have] so many people doing good things [but] they don’t meet and don’t match. Hopefully I can be that bridge,” Aquino said.