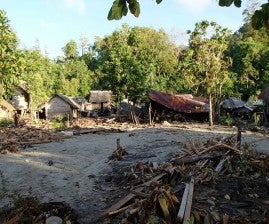 The destroyed Venga village following a Tsunami Wednesday Feb. 6, 2013, in Temotu province, Solomon Islands. The damage seen is part the survey by the assessment crew of the aid organisation World Vision. Solomon Islands authorities say at least four people are missing and presumed dead after an earthquake triggered a tsunami. Waves of up to 5 feet hit the western side of Santa Cruz Island and damaged up to 80 properties. Dozens of aftershocks have followed. Other tsunami warnings are canceled. AP Photo / World Vision

SYDNEY— Aid workers struggled to reach remote, tsunami-ravaged villages in the Solomon Islands on Thursday, as the death toll rose with more bodies found in wrecked homes and debris in the South Pacific island chain.

At least nine people, including a child, were killed when a powerful earthquake set off a small tsunami that sent 1.5-meter (4 foot, 11-inch) waves roaring inland on Santa Cruz Island, in the eastern Solomons, on Wednesday. Around 100 homes across five villages were damaged or destroyed.

The waves proved deadly for five elderly villagers and a child, who weren’t fast enough to outrun the rushing water, said George Herming, a spokesman for the prime minister. Three more bodies were found Thursday, but Herming said details of how those victims died were not immediately available.

Several others are missing and dozens of strong aftershocks were keeping frightened villagers from returning to the coast, Herming said.

“People are still scared of going back to their homes because there’s nothing left, so they are residing in temporary shelters on higher ground,” Herming said.

The tsunami was generated by an 8.0-magnitude earthquake that struck near the town of Lata, on Santa Cruz in Temotu, the easternmost province in the Solomons.

Disaster officials were en route to the isolated area Thursday after the local airport, which was flooded by the tsunami, was finally cleared of debris.

The Solomons comprise more than 200 islands with a population of about 552,000 people. They lie on the “Ring of Fire” — an arc of earthquake and volcanic zones that stretches around the Pacific Rim and where about 90 percent of the world’s quakes occur.

More than 50 people were killed and thousands lost their homes in April 2007 when a magnitude-8.1 quake hit the western Solomon Islands, sending waves crashing into coastal villages.

Read Next
Jets roar as US, Japan, Australia drill in Pacific
EDITORS' PICK
Duterte signs law giving rights, more protection to foundlings
Comelec won’t proclaim party-list groups yet
Honolulu Café is the cure for your Egg Tarts and Roastings cravings
DOJ-led panel drops 29 cases of torture, EJKs
Luxe property: A way to build, preserve wealth
House energy committee chair Arroyo bats for cheap electricity
MOST READ
Heart Evangelista gets a ‘no’ from Chiz Escudero after asking, ‘Do I deserve a bag?’
BIZ BUZZ: Flip-flopping BIR
3 Iloilo residents found with Omicron subvariant
Man posing as Marcos spox revealed to be an inmate in Bilibid — Guevarra
Don't miss out on the latest news and information.