A setback, but not back to square one | Inquirer News
Close
menu
search

A setback, but not back to square one 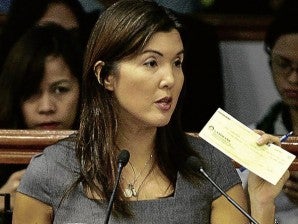 MANILA, Philippines—Sen. Pia Cayetano has thrown in the towel as far as the bill she proposed to strengthen the laws designed to prevent the spread in the country of acquired immune deficiency syndrome (AIDS) and HIV, the virus that causes it.

Cayetano, the chair of the Senate committee on health, conducted a public hearing on her Senate Bill No. 3398 on Thursday but doubted that it would reach the plenary with only three session days left before Congress goes into a long recess for the election campaign period.

But, as she will still be in the Senate in the next three years, she said she would just refile the measure in the next Congress after the 2013 elections.

“It may have been set back but for me it’s not [back to] square one,” Cayetano said.

Cayetano noted that the recently passed RH law already addresses many of the issues involving HIV/AIDS, particularly education and awareness of the disease.

According to the senator, 15 years after Republic Act No. 8504, or the Philippine AIDS Prevention and Control Act of 1998, became law, the HIV/AlDS problem in the Philippines has worsened contrary to the primary goal of the legislation which was to thwart the prevalence of the disease in the country.

Read Next
Magpale to bring in own trusted staff when she moves to Governor’s Office
EDITORS' PICK
Gordon calls 2 Pharmally execs ‘Senate fugitives’ after no-show in probe
Isko Moreno bares ‘two-pronged’ approach to rehabilitate MSMEs
NCR’s COVID-9 alert level may be downgraded from 3 to 2 soon — DOH
Climate Change Commission and Nestlé PH to discover sustainability-focused solutions
What’s at stake for every fighter at ONE: NextGen
Legarda emphasizes role of ICC/IPs in nation building this IP month
MOST READ
LJ Reyes says Paolo Contis made ‘no efforts’ to talk to her after their split
Yang’s Princeton degree raises eyebrows among senators
Gordon calls 2 Pharmally execs ‘Senate fugitives’ after no-show in probe
Drivers with no traffic violations can now renew licenses for 10 years
Don't miss out on the latest news and information.