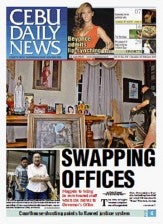 The fate of eight trusted employees of suspended Gov. Gwendolyn Garcia, including her chief of staff Elizabeth “Bess” Francia, hangs in the balance after her office was padlocked on Wednesday.

Where will they work?

Acting Gov. Agnes Magpale suggested a “swap” of confidential staff members to avoid the awkwardness of having them report to her.

Magpale said she would like to exchange the pool of confidential employees, who techncially have to report her, with that of acting Vice Gov. Julian Daan, who is an ally of Garcia.

In turn, Magpale wants to bring her own trusted staff members from the vice governor’s office when she moves into the east wing.

Since the election period ban prohibits any transfer of government employees, a request was made to the Commission on Elections (Comelec) to allow the transfer.

It will take at least a week to wind up an inventory of paintings, furniture, and personal mementos in the office occupied for nine years by Garcia before Magpale can clear out space and move in.

“But we have to take out some of the furniture because I don’t want to risk them getting damaged,” she said, referring to personal furnishings of Garcia in the room.

Other staffers in the Office of the Governor continue normal work at the adjoining extension office which was not locked down.

“Lisud sigutro pagsugo ni Amor and Bess after what happened,” said Magpale. “But pending Comelec approval of the swapping, there have to report here to my office for the meantime.”

A Memorandum was issued Thursday to the eight staff members to immediately report to Magpale’s office with a warning that failure to do so “may subject you to the possibility of charges of insubordination among others.”

The eight are province-paid employees co-terminus with Garcia, whose term still ends on June 30, 2013.

Francia, who earlier had a near-scuffle with police sentries when she tried to get through a human barricade of policemen outside the Governor’s Office, didn’t show up for work yesterday. Neither did her colleagues.

“After what happened to us last Wednesday, nasakit ko,” Francia told Cebu Daily News over the phone.

She said she took a one-day sick leave but would report on Monday ton consult with the HR office and Administrator about her status.

Amor Sarmiento, Garcia’s confidential secretary, said she too was sick.

“I still don’t know when I will be feeling better. Maybe Monday,” she said.

Magpale stood by her decision to lock out Garcia after the suspended governor slipped out on the evening of Jan. 29 to go to Oslob town, breaking a 43-day stay-in protest against her suspension by the Office of the President.

Police sealed the doors with wooden planks, chains and padlocks on orders of Magpale the next morning.

Garcia’s camp deplored the closure as “illegal”. Lito Astillero, one of her lawyers, said Garcia was “entitled to have an office” because she was not removed from office.

Magpale, however, said Garcia had “abused” the limits of maximum tolerance shown to her since the time she defied the suspension order served last Dec. 19, 2013.

“Since we discovered that she already left the office last night (Jan. 29), this is already too much. As administrator of the building I have to secure the place. … This is already a mockery of the order of the President and an abuse nasad. Even the next room was used by their supporters… We have given them one month and 11 days already… the people of Cebu will understand how much electric power is being used there for 24 hours a day.”

Yesterday, Magpale said she welcome any charges Garcia’s camp said they would file against her.

“Let them file para klaro. As far as I know, I am now the custodian of these properties and buildings. When she got suspended, she lost all privileges starting with the salary, emoluments, the office and the staff,” said Magpale.

“This is purely a local, administrative matter. Wa sad ko badlunga sa Presidente when I locked it so I know that he has complete trust and confidence in what I am doing.”

The Office of the Governor is entitled to about 100 employees of which eight hold confidential, co-terminous postions.

On Friday, Mapgale’s spokesperson Dara Acuzar said the eight employees are duty bound to report to the acting governor or face insubordination.

Acuzar, however, said, “We need to be circumspect about it since we still have not received any word from the Provincial Administrator yet” who was tasked to serve the memo.

The Vice Governor’s Office has 57 employees while the Office of the Governor is entitled to about 100 employees.

In an interview, Daan said he is willing to accept the staff left by Garcia. “No problem with me but I will also bring my own co-terminus employees also.”

At least 20 policemen from the Regional Public Safety Batallion stood guard yesterday blocking the hallway door leading to the Governor’s Office on the second floor. The inner office remains locked up and nailed shut with wooden planks.

The east wing lobby entrance that leads to the Governor’s Office also is sealed with wooden planks with policemen roving the Capitol compound. A yellow police line tape surrounds entry points declaring the place off limits.

Magpale said she will move into the Governor’s Office after an inventory is completed.