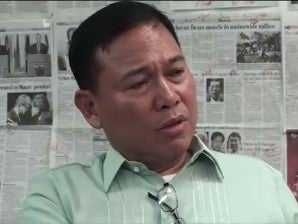 MANILA, Philippines – The military on Tuesday welcomed the appointment of Army chief Lt. Gen. Emmanuel Bautista as the next Chief of Staff of the Armed Forces of the Philippines.

The incoming chief of the Armed Forces is one of the originators behind the military’s current anti-insurgency strategy, the Internal Peace Security Peace Plan Oplan Bayanihan.

The IPSP campaign seeks to be “people-centered” rather than the traditional military approach.

“Lt Gen. Bautista’s appointment comes very timely as the implementation of the IPSP shifts to high gear on its third year of implementation. He was then the AFP Deputy Chief of Staff for Operations in 2010 when he spearheaded the crafting of the IPSP Bayanihan in partnership with all the stakeholders,” military spokesman Colonel Arnulfo Marcelo Burgos Jr. said in a statement.

“We are also optimistic that with his leadership, our modernization and capability upgrade program will further take a momentous step forward in our intent to achieve a minimum credible defense posture,” he added.

Bautista is a member of Philippine Military Academy Class of 1981.

He will replace incumbent AFP chief General Jessie Dellosa in turnover rites on Thursday at Camp Aguinaldo. Dellosa is reaching the mandatory retirement age of 56.