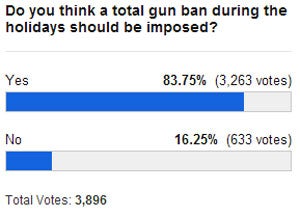 MANILA, Philippines—Majority of the respondents that joined an unofficial poll conducted by INQUIRER.net want the government to impose a total gun ban during the holidays in the Philippines.

The unofficial poll was held after 7-year-old Stephanie Nicole Ella of Caloocan City died from a stray bullet that hit her during the New Year’s Eve revelry in their area.

The incident caused an uproar and a clamor to the government to impose tighter gun control measures especially during the holidays. Over the years, some gun owners in the country fire their guns indiscriminately to welcome the new year.