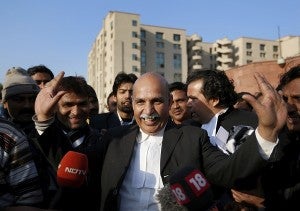 V.K. Anand, lawyer for one of the accused, gestures as he speaks to the journalists outside the Saket district court complex where the accused in a gang rape are to be tried, in New Delhi, India, Thursday, Jan. 10, 2013. Police badly beat the five suspects arrested in the brutal gang rape and killing of a young woman on a New Delhi bus, the lawyer for one of the men said Thursday, accusing authorities of tampering with evidence in the case that has transfixed India. (AP Photo/Saurabh Das)

NEW DELHI— The cases of five men charged in the fatal gang rape of a young woman on a moving New Delhi bus were expected to be shifted to a fast-track court at a hearing Monday, defense lawyers said.

The hearing had been set for last week but was rescheduled when it turned out that the official list of charges was not completely legible.

Five men have been charged with the Dec. 16 attack on the 23-year-old student, who died two weeks later in a Singapore hospital. A sixth suspect, who says he is 17 years old, is likely to be tried in a juvenile court if medical tests confirm he is a minor.

In a nation where court cases often linger for years, India’s government set up a special fast-track court earlier this month to deal with crimes against women.

On Sunday, police said they had arrested six suspects in another gang rape of a bus passenger in India.

Police officer Raj Jeet Singh said a 29-year-old woman was the only passenger on a bus as she was traveling to her village in northern Punjab state on Friday night. The driver refused to stop at her village despite her repeated pleas and drove her to a desolate location, he said.

There, the driver and the conductor took her to a building where they were joined by five friends and took turns raping her throughout the night, Singh said.

The driver dropped the woman off at her village early Saturday, he said.

Singh said police arrested six suspects on Saturday and were searching for another.

Gurmej Singh, deputy superintendent of police, said all six admitted involvement in the rape. He said the victim was recovering at home.

Also on Saturday, police arrested a 32-year-old man for allegedly raping and killing a 9-year-old girl two weeks ago in Ahmednagar district in western India, the Press Trust of India news agency reported. Her decomposed body was found Friday.

Police officer Sunita Thakare said the suspect committed the crime seven months after his release from prison, where he had served nine years for raping and murdering a girl in 2003, PTI reported Sunday.

The attack of the woman on the New Delhi bus set off an impassioned debate about what India needs to do to prevent such tragedies. Protesters and politicians have called for tougher rape laws, police reforms and a transformation in the way the country treats women.

“It’s a very deep malaise. This aspect of gender justice hasn’t been dealt with in our nation-building task,” Seema Mustafa, a writer on social issues who heads the Center for Policy Analysis think tank, said Sunday.

“Police haven’t dealt with the issue severely in the past. The message that goes out is that the punishment doesn’t match the crime. Criminals think they can get away it,” she said.

In her first published comments, the mother of the deceased student in the New Delhi attack said Sunday that all six suspects in that case, including one believed to be a juvenile, deserve to die.

She was quoted by The Times of India newspaper as saying that her daughter told her that the youngest suspect had participated in the most brutal aspects of the rape.

The five men who have been charged with the physiotherapy student’s rape and murder face a possible death penalty if convicted. If medical tests confirm the sixth suspect is a minor and he is tried in a juvenile court, his maximum sentence would be three years in a reform facility.

“Now the only thing that will satisfy us is to see them punished. For what they did to her, they deserve to die,” the newspaper quoted the mother as saying.

Some activists have demanded a change in Indian laws so that juveniles committing heinous crimes can face the death penalty.

The names of the victim of the Dec. 16 attack and her family have not been released.