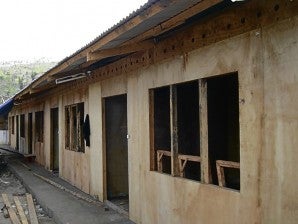 Next to the almost-finished structure is another completed bunkhouse built by the  International Organization for Migration (IOM).

There’s not much difference between the two bunkhouses, as each has 10 rooms meant for those rendered homeless by Typhoon “Pablo” that wrecked the village on Dec. 4.

Both bunkhouses have coconut lumber for posts and brackets, ordinary plywood for walls, windows and doors, and concrete floors.

However, the DSWD bunkhouse has three windows per room while IOM’s has only two. On the other hand, IOM’s has two doors while the DSWD’s has only one. The rooms’ floor area has 192 square feet for the DSWD and  180 sq ft for the IOM.

The dirty kitchen is a long concrete cooking counter with steel bars to hold the pots. The sinks are made of concrete with holes in the middle. The bathrooms have plain GI sheets as walls while the comfort rooms have simple toilet bowls.

Dave Bercasio, head of IOM’s suboffice based in Davao City, said their bunkhouse, sans the bathrooms, dirty kitchen and sink, costs only P200,000.

Bercasio said his group has an agreement with the DSWD to “build where they build,” making it easier for them to identify areas that need bunkhouses.

Where there are DSWD bunkhouses, IOM doesn’t construct bathrooms, dirty kitchen and sinks, as occupants can share what the government agency has provided. 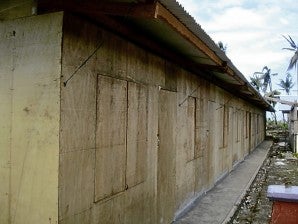 THE COMPLETED bunkhouse of the International Organization for Migration in San Antonio village, Cateel town in Davao Oriental

Eusebio said IOM’s bunkhouses were less expensive because it did not include the bathrooms, kitchen and sinks. “I still do not know how IOM was able to build at P200,000,” he said, adding that the material cost of the DSWD’s bunkhouse is already P419,000, with the balance going to labor and hauling of materials. Eusebio said IOM also brought their own  workers.

The DSWD plans to build 60 bunkhouses for Boston, Cateel and Baganga. Of these, 21 will be built  by the department, while 39 others will be outsourced at the price of P650,000. Eusebio said the budget was P100,000 higher because contractors have to pay taxes, haul materials and pay workers.

Eusebio said the materials used in the construction of the bathrooms, kitchen and sink would “more or less” explain the “disparity” between their building cost with that of IOM’s. “We have documents to support that,” he said.