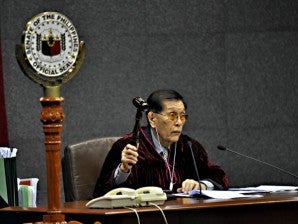 MANILA, Philippines – Senate President  Juan Ponce-Enrile rejected on Thursday the  idea of reconciling with Senator  Miriam Defensor-Santiago, saying it is difficult to  talk to people with “lunar minds.”

(I no longer want to patch things up with those who don’t like me. It’s difficult to talk to people with lunar minds.)

And his tirade against Santiago went on.

This time, Enrile blasted Santiago for the latter’s alleged  absences in the Senate  in  almost half  of the session days  last year.

This was the reason, he said, he did not give  Santiago an additional P1.6 million MOOE (maintenance and other operating expenses) in December, 2012.

Santiago was among the four senators who only received the first tranche (P600,000)  of the  total P2.2 million additional MOOE released to all 23 senators in November last year.

(They were not given the amount anymore. I gave it to the Senate workers.)

(Miriam no longer attends our caucus. If you check the  records…she was absent half of the session days. She shows up only when she wants to brag. During the impeachment trial she was always present.)

Aside from Santiago, the three senators who did not get the P1.6 million fund were Senate Minority Leader Alan Peter Cayetano, Senators Pia Cayetano and  Antonio “Sonny” Trillanes IV.

Read Next
Court martial finds soldier in Al Barka bloodbath guilty
EDITORS' PICK
NCR’s COVID-9 alert level may be downgraded from 3 to 2 soon — DOH
What’s at stake for every fighter at ONE: NextGen
Isko Moreno bares ‘two-pronged’ approach to rehabilitate MSMEs
Climate Change Commission and Nestlé PH to discover sustainability-focused solutions
Legarda emphasizes role of ICC/IPs in nation building this IP month
Gordon calls 2 Pharmally execs ‘Senate fugitives’ after no-show in probe
MOST READ
Drivers with no traffic violations can now renew licenses for 10 years
LJ Reyes says Paolo Contis made ‘no efforts’ to talk to her after their split
Yang’s Princeton degree raises eyebrows among senators
Gordon to Duterte: You? Teaching me courtesy?
Don't miss out on the latest news and information.