PNP to set up more checkpoints for election gun ban 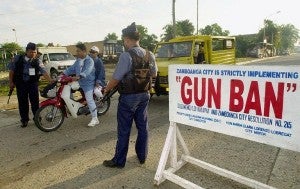 MANILA, Philippines — The Philippine National Police (PNP) has said there will be more police checkpoints in the coming days to monitor the implementation of the election gun ban that will start on Jan. 13.

“There will be more checkpoints in various parts of the country to implement the gun ban,” said Chief Superintendent Generoso Cerbo, PNP spokesperson.

Among these are the following:

*  Policemen have to be in proper general office attire (GOA) or patrol uniforms and not combat uniforms or camouflage;

*  The team has to be led by an official;

*  There should be a sign that indicates that it is a checkpoint and the name of the team leader; and,

*  There should be a marked police vehicle.

Cerbo stressed that the checkpoint should be in a well-lit area to allow motorists to be able to read the sign and see the policemen.

“Our police should also be polite when they approach the motorists. This would inspire trust on the part of the motorists,” Cerbo said.

The procedure also indicates that the policemen are limited to conducting visual checks of the vehicles they are inspecting.

Police authorities can only inspect vehicles or their drivers and passengers to get off under “extreme circumstances and when there are reasonable grounds” such as if the vehicles are suspected to be “getaway vehicles” or hot cars.

Interior Secretary Manuel “Mar” Roxas II said in a press conference on Wednesday that policemen should strictly follow the PNP operations manual, especially with more checkpoints during the campaign period owing to the gun ban.

Roxas called on the public not to be afraid of police checkpoints only because the clash in Atimonan town in Quezon province happened, where 13 alleged criminals were killed.

Families of the fatalities have claimed the event was a rubout and no less than President Benigno Aquino III himself expressed misgivings that the killing was a result of a shootout.

The President has directed the National Bureau of Investigation (NBI) to investigate the incident to ease suspicions of a possible whitewash.

Meanwhile, the Army commanding general, Lt. Gen. Emmanuel Bautista, assured the Commission on Elections of the military’s full cooperation in the investigation being conducted by the National Bureau of Investigation (NBI).

“They (soldiers) will cooperate with the investigation. They will give the facts on what really happened. That’s the (military’s) instruction to them,” Bautista said.

Bautista reiterated that the Army Special Forces officers and men who were involved in the clash were only asked by the PNP for support in the operation against the alleged criminals.

“(The support) was done in good faith,” Bautista said.

Bautista said the AFP’s Southern Luzon Command (Solcom) has also initiated a fact-finding mission to look into the soldiers’ involvement in the clash but the NBI remains to be the lead investigator.

Asked if there would be an order to relieve the Army personnel involved in the encounter, Bautista said there was no basis to do so.

“The instruction to the soldiers is to submit themselves to the investigation and based on that, we will also wait for the Solcom investigation,” he said.

Solcom command chief, Maj. Gen. Alan Luga, said in a separate interview that according to the battalion commander at the scene of the clash, their group was fired upon by the alleged group of criminals.

“It was legitimate because according to the battalion commander, they were fired upon so they retaliated. Anyway, the investigation of the NBI is ongoing. They are taking the statements of the soldiers,” Luga said.