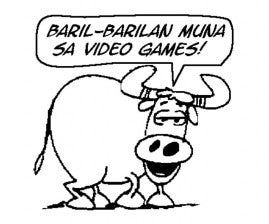 Until the five-month gun ban period is over, it looks like President Aquino will just have to settle with playing video games to sharpen his shooting skills.

Shootfests and other activities that involve firing guns are prohibited once the gun ban takes effect on Jan. 13, according to the Commission on Elections (Comelec).

“While our resolution made no mention about shootfests, the wisdom and morality of it is that they are banned, they are not tolerated because the use of guns are not allowed during the election period,” Election Commissioner Rene Sarmiento said on the phone.

Comelec Resolution No. 9561 prohibits anyone from carrying firearms outside residences and in places of business unless authorized in writing by the election body.

The ban also covers airguns, airsoft guns or replicas of firearms “in whatever form that can cause an extraordinary person to believe that they are real,” according to Comelec rules.

Other deadly weapons, too

Deadly weapons such as bladed instruments, hand grenades and explosives,  except pyrotechnics, are included in the ban.

Asked if the President, a gun enthusiast who won the championship trophy in a recent shooting competition with police and military officials, was exempted from the ban, Sarmiento said: “No one is above the law.”

“Even us in the Comelec, it is already a given that we cannot join or hold shootfests once the election gun ban becomes effective,” he said.

Asked what the Comelec would do if Mr. Aquino fired a gun during the ban, Sarmiento said: “Theoretically, the rule of law has to be observed. No one, no matter how mighty and powerful, is above the law.”

“We give exemption more (to) the security rather than the person himself. Which means if you are the Senate President, you won’t be given exemption but your security [will be]. That’s the rule,” Brillantes explained.

Even the Presidential Security Group does not get an automatic exemption, he said. “They would have to apply and we have to approve their application,” he said.

Brillantes also said the Comelec en banc was seriously considering making amendments to the gun ban rule if only to make them clearer.

Brillantes disclosed that the poll body was already swamped with queries from people about whether they were covered by the exemption.

“We are still talking about what amendments to make … but there are already about 1,000 people applying for an exemption,” he said.

The embassies of the United States, Pakistan, Vietnam and Iraq, as well as Gambian Consul Agnes Heibonhoa also asked for exemption.