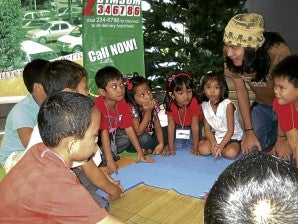 BASADOUR Nicolo Nasol facilitates the children’s writing of their own story “From Enemies to Friends.” Photo: Cris Evert Lato

CEBU CITY—In the advent of cell phones and computers, teachers should be more creative in encouraging children to read. Confronting this challenge squarely is Keena Martinez, 27, a teacher of Child Learning Foundation (CLF) in Mandaue City who also doubles as a librarian.

Martinez said she would show her pupils films based on books just to generate interest. Sometimes, she would transform textbook data into “Do You Know That” format by inserting interesting facts about science and history in grammar lessons.

She recalled one instance when the lesson was about verbs. Instead of just discussing verbs, she told her students about the Black Plague, a pandemic that killed millions of people especially in Europe in the 14th century, and related it to  “The Pied Piper of Hamelin,” a legendary story of the death of many children in the town of Hamelin, Germany.

“I want to get them to read about historical events. [By telling them tidbits], they might read the story,” Martinez said.

In another instance, the teacher cited a discussion of the story of Rosa Parks, an African-American civil rights activist, during an exercise. Instead of just doing the exercise, she told the story of the history of racism and slavery, and the fight for equality.

“[For next lessons], I plan to read ‘Henry’s Freedom Box’ to make this historical event more graphic for the children and to help them see that books are rich sources of information and entertainment,” Martinez said. Written by Ellen Levine,  “Henry’s Freedom Box” tells the story of a slave in the 19th century who gained his freedom by mailing himself in a wooden crate.

“I try to talk about books in my lessons and make it interesting to them. You have to make it fascinating to them,” Martinez said. She points out pupils easily shift interest and attention to cell phones from books.

Martinez is not the only teacher who has gone out of the box to encourage the pupils to love reading.

Teachers in the 27 public schools in Mandaue City have created a culture of reading through the Drop Everything and Read (DEAR) project as part of the Department of Education (DepEd) “Every Child A Reader” program.

Under the project, the teachers set aside time for children to just “drop everything” and read, said Belen Zanoria, English supervisor of the DepEd-Mandaue District.

“Books are faced with many competitors such as television, the Internet and cell phones. In our schools, there is a particular time in every classroom’s schedule when the pupils are encouraged to stop what they are doing to read books,” said Zanoria, a teacher for 20 years.

She pointed out that private sector initiatives are a welcome inspiration for schoolchildren to do better in reading. One of these is Story Hours, a monthly initiative organized by Banilad Town Center, the reading advocate group Basadours and the Inquirer.

“It creates excitement and venue for them to share what they learn or learn some more. They see from pupils of other schools how they answer quickly because they read,” Zanoria said.

During the third installment of Story Hours on Oct. 27, some 40 children from CLF and Cabancalan 2 Elementary School in Mandaue were treated to an afternoon of storytelling and story writing.

CLF pupils donated books to Cabancalan 2, which will be placed in the school’s Learning Resource Center (LRC), which is equivalent to a mini-library.

Freelance writer Mae Filomena read “Apolakus,” a story written by Alice Mallari and illustrated by Leo Agtuca. “Apolakus” deals with the topic of bullying and how to stop it.

“I learned from the story that there is no need for any magic word to fight bullies. You just need to say no when you feel that you are bullied—or tell your teacher or your parents [about it],” said Ramos brothers, Jedidiah, 10, and Jeremiah, 9, of CLF.

Keenan Rafael Tantuico, 7, a Grade 2 pupil, found it a good experience to share with other pupils his love for reading books. “I was able to meet friends from the other school. I like that they also love reading because I really love reading,” he said.

After the storytelling session, the children were helped by the Basadours in writing their own stories with “child bullies” as main subject.

Aaron Caleb Umeres, a Grade 1 pupil of CLF, said he enjoyed the story writing activity because it made him write what he knows.

Zanoria said the project inspired them to continue efforts to encourage the pupils to read. Mandaue District actively campaigns for more LRCs, she said. Of the 27 public schools in the district, 17 do not have LRCs.

Martinez agreed. “Reading makes them learn and see what might happen. It is not definitely everything that will happen but gives them the introduction. It prepares them for life.”

“That is why I pity those who just face television or their cell phones because they miss out a lot,” she said.

The initiative of the teachers appeared to be bearing fruit.

A Grade 2 pupil of Cabancalan 2 Elementary School said the knowledge she learned from books helped her write essays in her English and Filipino subjects.

“If you read books, you learn a lot of things. What is the center of the solar system? Which planet do we live?” said Carmela Dawn Adolfo, 8.