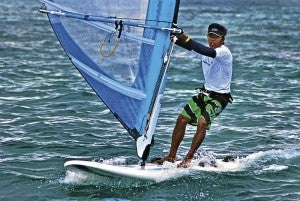 Geylord Coveta, 30, of Mabini, Batangas, won first place in the men’s class of the prestigious 2012 RS:One World Championships held on Dec. 10-15. He bested Chang Hao of Taiwan and Yuta Nagano of Japan.

Another member of the Philippine team, Yancy Kaibigan, 17, also from Batangas, placed third in the espoir men’s division, behind Chun Ting Lee and Lok Yiu, both from Hong Kong.

A third Filipino, Rolando Francisco, 59, won the bronze medal in the masters’ class. The event was won by Micah Sambelan (Indonesia), followed by Kazuyoshi Nagashima (Japan).

Immanuel Cabili, president of  PWA, said the hosting of the international competition also affirmed Boracay as one of the world’s top destinations for windsurfing and water sports.

Read Next
Creative ways of making children read
EDITORS' PICK
Look Through: The fate of impounded stray dogs
House energy committee chair Arroyo bats for cheap electricity
What to watch out for when selecting a video surveillance solution
23,000 cops to be deployed nationwide for school reopening
Unleash the photographer in you this World Photography Day with vivo smartphones
DOH says COVID-19 cases plateauing, but public shouldn’t be ‘complacent’
MOST READ
Sharon Cuneta asks for prayers for friend in ICU who suffered silent stroke
Korina Sanchez reunites with former ABS-CBN co-anchors Julius Babao, Cheryl Cosim
Light therapy could be the answer to your sleep problems
Solons file resolutions seeking probe on ABS-CBN, TV5 merger
Don't miss out on the latest news and information.