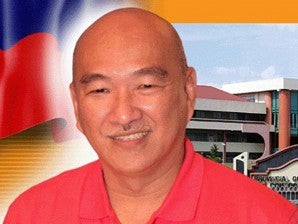 NEW BATAAN, Compostela Valley —Mining is not to blame for the deadly landslides and flash floods spawned by Typhoon “Pablo,” Gov. Arturo Uy said on Thursday.

Uy said villages hardest hit by the typhoon were not mining areas.

Barangays (villages) most affected by Pablo were identified as Andap, Poblacion, Cogonon and San Roque, whose residents mostly derive their income from growing crops such as banana, rice and coffee.

“It’s not mining because the heavily hit areas are not mining areas at all,” he told reporters here.

The first, he said, was previous illegal logging activity that denuded the mountain ranges surrounding the valley. “There’s no illegal logging here anymore, because obviously, there are few trees left to cut,” he said.

The second possible explanation, Uy said, was the reported collapse of a waterfall that runs into a river in Barangay Andap. But he admitted his office had no visual confirmation of this.

Alfie Ayuban, 31, a small-scale miner digging in the mountain village of Camanlangan, said “several tunnels” had been carved in  the mining area.

He and eight others were allowed to mine in one tunnel, while other small-scale miners took care of the other tunnels. He could not give the total number of such tunnels.

The last big mining company to operate in New Bataan was the Canadian-owned Sabina Gold and Silver Corp. but it ceased operations a few years ago.

Ayuban, whose roadside house collapsed, said he had not yet returned to his place of work to check if it had been affected by Pablo.

Read Next
Church, Red Cross, other groups send aid to typhoon victims
EDITORS' PICK
Metro Manila to remain under COVID Alert Level 2 until December 15
Legarda: Ending Violence Against Women, a cause for all
A delightful blessing!
Duterte open to making jabs mandatory; Cabinet mulls ‘pressuring’ the unvaccinated
IATF tightens border control, suspends entry of fully vaxxed nationals from ‘green’ countries
Villar Group gears up for AllValue Shopping Party on Dec. 3; around P 1-million promos and discounts up for grabs
MOST READ
Quiboloy warns of ‘much worse than Omicron virus’ if his ‘persecution’ is not stopped
Bongbong Marcos’ conviction in tax case not a crime involving moral turpitude — lawyer
Marcoleta defends pol ads on ABS-CBN
IATF tightens border control, suspends entry of fully vaxxed travelers from ‘green’ countries
Don't miss out on the latest news and information.