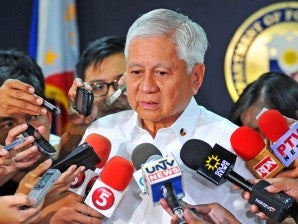 Foreign Secretary Albert del Rosario is the richest Cabinet secretary, having declared P657.8 million with no liabilities in his statement of assets, liabilities and net worth. INQUIRER FILE PHOTO

He may have been the highest paid in the Aquino Cabinet last year, but Foreign Secretary Albert del Rosario just gave it all away, according to diplomatic officers.

In December last year, Del Rosario, who also happens to be the richest Cabinet member, played Santa Claus and donated his 2011 salary for “equal distribution” to the more than 1,000 officials and personnel of the Department of Foreign Affairs, at least those based in the country at the time.

Department undersecretaries down to the lowest employee—in the home office and regional offices around the country each received a P420 bonus last year from his salary, according to Foreign Undersecretary Rafael Seguis.

“In December 2011, the secretary returned to the DFA cashier his total salary from March to December 2011 for equal distribution to all DFA personnel,” Seguis said.

“Although the amount that each received was not much, everyone was deeply grateful to the secretary for his generosity,” Seguis added, noting that the extra cash came at a time the staple food allowance of home office personnel was still under consideration.

Seguis also clarified that the P2-million “discretionary and extraordinary and miscellaneous funds” that Del Rosario received for 2011 should not be considered part of his take-home pay because they are “used for certain official purposes and expenditures of public character.”

He said the funds were used for “necessary intelligence operations at the DFA…connected with powers and functions of the government.”

Del Rosario is the richest Cabinet secretary, having declared P657.8 million with no liabilities in his statement of assets, liabilities and net worth. Christine O. Avendaño