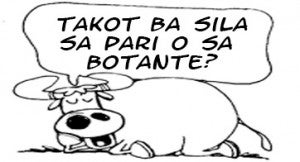 This Palace official suspects one reason for the lack of quorum in the House of Representatives during deliberations on the reproductive health (RH) bill: Reelectionist lawmakers fear provoking their parish priests.

In the countryside, there is such a thing as a “Catholic vote,” and pro-RH lawmakers would rather absent themselves from the sessions than become the object of attacks from the pulpit in the run-up to the May 2013 elections, according to Secretary Manuel Mamba.

Mamba, head of the Presidential Legislative Liaison Office, on Sunday said lawmakers were “fearful” of provoking their parish priests by appearing in the deliberations, much more by voting for the controversial measure.

“If you’re a politician, you stay out of trouble. They (the clergy) are not even the enemy. Why provoke them? By voting for the measure, you’re provoking the Catholic hierarchy,” Mamba said in a phone interview.

“The elections are near. You don’t want to create enemies. In local politics, there is a Catholic vote, especially in areas where the clergy are very influential on their flock. If the clergy are popular, they have the pulpit. They can do it every Sunday,” he added.

So, for some pro-RH lawmakers with their eyes on the midterm elections, the option is “to absent themselves” from the deliberations, said Mamba, whose office acts as middleman between Malacañang and Congress in the choice of the legislative agenda.

Mamba said President Aquino was aware of such dynamics in local politics. Being a former lawmaker himself in  Cagayan province, Mamba said he “fully understood” where the lawmakers were coming from.

“It would have been much easier if it were put to a vote not too close to the elections,” he said.

The campaign for the midterm elections begins  in mid-February.

The Church fiercely opposes the measure. After bold predictions by House leaders that the bill would be approved, plenary debates on the measure have bogged down for lack of quorum.

Lawmakers either skip sessions or leave after the roll call. Majority Leader Neptali Gonzales II said most of the absentees were supporters of the measure.

The RH bill would provide couples with information on family planning approaches, including modern contraception methods that the Church opposes. It would also widen reproductive health education in schools and government health centers.

Church officials oppose the measure, saying it might promote abortion as well as promiscuity. They consider some birth control pills as abortifacient.

The health department supports the bill, saying it would reduce maternal and child deaths in the Philippines.

The President has not issued a fresh call for his allies in the House to bring the measure to a vote.

“The President has said his piece,” Mamba said, referring to Mr. Aquino’s Aug. 6 caucus with the lawmakers. “He has given orders for the lawmakers to be present, have a quorum and vote on it. He will not impose whatever position they will have. What’s important is they vote on it.”

After the caucus, the lawmakers voted overwhelmingly to terminate debates. But with the lack of quorum, no amendment has been introduced.

Deputy presidential spokesperson Abigail Valte said the lawmakers had yet to discuss with the President the matter of certifying the measure as urgent. Otherwise, Malacañang was leaving its approval up to the lawmakers, she said.

‘Ripe for a vote’

Senate President Juan Ponce Enrile and Majority Leader Vicente Sotto III are opposed to a counterpart measure in the chamber. Unlike in the House, the bill has better chances of getting approved in the Senate, with more senators backing it, according to Mamba.

“I think the RH bill is ripe for a vote in the Senate,” Sen. Ferdinand “Bongbong” Marcos Jr. said on dzBB radio. “The issues have become tedious since I sponsored my own version as a congressman. All of us are ready, win or lose.”

Marcos said Senators Miriam Defensor-Santiago and Pia Cayetano, the main authors of the Senate bill calling for a national policy on reproductive health and population, had agreed it was time to put it to a vote whatever the outcome.

“I will support the bill,” Marcos said.

But he said the 2013 elections would play a factor in the outcome of the vote.

“I’ve heard that some of the authors [in the House] have withdrawn their support because of the election. That’s the reality in our politics. If you are candidates, it’s really difficult to oppose the Church,” Marcos said. With reports from Gil C. Cabacungan and Inquirer Research