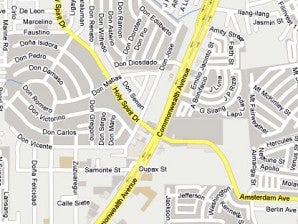 MANILA, Philippines—The body of a man was found sprawled in the Commonwealth Avenue tunnel in Quezon City Friday night, his face wrapped in packing tape and a car key taped to it, police said.

On closer examination, police found an improvised lock pick embedded on the forehead of the man, estimated to be 35 and 40 years old.

Case investigator Police Officer 1 Romeo Niño II said the man was likely a victim of summary execution, having been killed elsewhere and his body dumped in the tunnel under Commonweath Avenue in Barangay Holy Spirit near the Sandiganbayan building.

The discovery of the body was reported to the police around 7:50 p.m. Friday by a motorist who found it lying on its belly on the westbound lane of the tunnel, Nino said.

The victim was described as 5’2″ tall, sporting crewcut hair, and clad in denim shorts with a brown leather belt and a black shirt.

Police suspect the man was a victim of summary execution. The man’s face was wrapped with packing tape and a nylon rope was wound around the neck.

Taped to the man’s face with packing tape was an Isuzu car key. An improvised pick lock was found embedded on the forehead, Niño said, adding the victim had a puncture wound on the left side of the chest and appeared to have been strangled as well.

Meanwhile, at past midnight Friday, a young man was shot dead in his neighborhood while his injured friend was able to run for help in Barangay (village) Sauyo, Niño said.

The body of Richard Santos, 21, was sprawled in front of a private school at around 12:20 a.m. Saturday.

His buddy, 20-year-old Arvy Masamoc, was rushed to a hospital by bystanders who heard his pleas for help as he ran.

Niño said he had yet to talk to Masamoc, who was confined at the Quezon City General Hospital.

Nino said Santos died of a single gunshot to the chest.

A man who was buying some barbecue in front of the Mary and Child Academy on Sauyo Road recalled hearing gunshots some meters away at past midnight.

Moments later, he saw Masamoc, a truck helper, running toward him and muttering that he was hit.

The bystander then rushed the injured man to the hospital. Policemen alerted to the shooting found Santos lying on his back in front of the school.