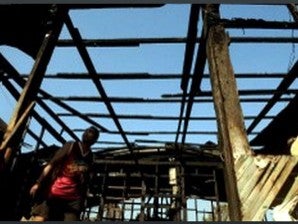 A man looks at the destroyed roof of his house in Manila on November 24, 2012 after an overnight fire razed a slum area. Three children died during the fire and almost 150 people were affected according to local media report. AFP PHOTO/NOEL CELIS

MANILA, Philippines—Three children, two of them left asleep alone in their home, were killed when fire razed a slum area in Quezon City on Friday night. At least 150 families were left homselss.

Baruelo said the charred bodies of Daniela Mercado, 7, and her brother, Danzell, 4, were recovered from their house in Barangay (village) Holy Spirit shortly before dawn Saturday, after the fire was extinguished.

Baruelo said the children’s father Danilo Mercado, a volunteer tanod or member of the neighborhood watch, was worried overnight because he had left his children asleep alone at home. The man told the authorities he went to work Friday night to help raise money for his wife, who was in the hospital after giving birth.

Only his children were left at home, sleeping by the light of a candle as Mercado said they had been without electricity for a week.

Baruelo noted that before Friday night’s fire, fires had also taken the lives of two children left to sleep alone in Manila while their parents were away at work and a half-blind boy who had been tied to his bed in Las Piñas.

At around 7 a.m. Saturday, firefighters found the burnt body of a 9-year-old boy identified on as CJ.

Baruelo said the boy had gotten out of the burning community but went back to look for his father. The child was subsequently reported as missing until his body was Saturday morning.

The blaze at the slum community, located near the Sandiganbayan, broke out at past 11 p.m. Friday near the Mercados’ house. The fire rapidly spread, eating up 50 houses.

Baruelo said Danilo Mercado went home upon hearing of the fire and told firefighters that he had left his children at home.

“At that time we could not confirm if the children were able to get out of the house or not,” the official said.

Firefighters were able to put out the fire at past 1 a.m.

He estimated damage at P1 million and said 150 families were left homeless.