Obama heads to Thailand to kick off Asian tour 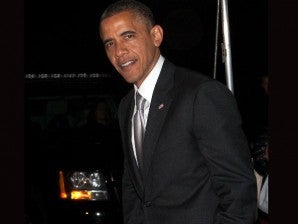 BANGKOK — President Barack Obama arrives in Asia Sunday to intensify a US foreign policy pivot towards the fast-rising region on his first overseas trip since re-election, including a landmark visit to Myanmar.

He will be the first sitting US president to set foot in the long-time pariah, reflecting a dramatic thaw in relations brought about by sweeping political changes under a new reformist government.

Obama, who has dubbed himself America’s first “Pacific president”, will first touch down in Thailand, then make a one-day stop in Myanmar on Monday, before joining regional leaders in Cambodia for the East Asia Summit.

He is making his fifth visit to Asia since taking office in 2009 and his second this year, a period otherwise consumed by heavy duty campaigning ahead of his poll triumph on November 6.

Obama’s first stop in Thailand is meant to signal that Washington is committed to a strong set of alliances in a region pre-occupied by the geo-political implications of a rising China.

“Allies are the cornerstone of our rebalancing effort in Asia,” said Ben Rhodes, a US deputy national security advisor, as Obama flew to Bangkok aboard Air Force One.

“Thailand is actually the oldest treaty ally of the United States, an ally since 1954 and a key partner in Southeast Asia.”

Soon after touching down, Obama will have an audience with Thailand’s revered King Bhumibol Adulyadej who has been in ill health, then hold talks and a news conference with Prime Minister Yingluck Shinawatra.

Obama plans to discuss US cooperation with Thailand, counter narcotics issues, terrorism, trade and trafficking, and will inaugurate a programme to connect US and Thai universities.

On Monday, Obama will fly to neighbouring Myanmar on a trip that would have been unthinkable just a year ago, but which has been opened up by the dramatic reform drive spearheaded by President Thein Sein.

Obama will hold talks with the former general, then travel to the lakeside residence of Aung San Suu Kyi, where his fellow Nobel peace laureate was held for long years of house arrest.

Suu Kyi has now entered parliament after her rivals in the junta relaxed their iron fists and made way for a nominally civilian government, albeit in a system still stacked heavily in favour of the military.

Some human rights groups said that Obama should have waited longer to visit, arguing that he could have dangled the prospect of a trip as leverage to seek more progress such as the release of scores of remaining political prisoners.

But officials say that Obama will encourage the regime to double down on more reform, and that his influence could be important at a crucial moment in Myanmar’s emergence from decades of isolation and repression.

The United States on Friday scrapped a nearly decade-old ban on most imports from the country, after earlier lifting other sanctions.

Ahead of the visit, Rhodes said Myanmar had made “positive” steps towards weaning itself from a military relationship with North Korea, and dangled the carrot of future military exercises with US and Thai forces if the reform effort is sustained.

Thein Sein has denied that Myanmar has such relations with North Korea, but sectors of the country’s powerful military are believed to be resistant to cutting all ties with the Stalinist pariah state.

The trip will be somewhat overshadowed by a wave of violence in Myanmar’s western Rakhine state between Buddhists and minority Rohingya Muslims, which the Organisation of Islamic Cooperation Saturday branded as “genocide”.

Obama will also be the first sitting US president to visit Cambodia late on Monday for talks with Prime Minister Hun Sen, ahead of the East Asia summit.

But Rhodes said that the White House had “grave concerns” over Cambodia’s record on human rights, and that Obama would not be visiting were it not for the fact that the East Asia Summit is being held there.

Cambodia has been a staunch supporter of China and was seen as scuttling an initiative on resolving Asian maritime disputes when Secretary of State Hillary Clinton visited for regional talks in July.

On the summit’s sidelines, Obama will meet China’s outgoing premier, Wen Jiabao, and Prime Minister Yoshihiko Noda of Japan, whose relations with Beijing have frayed because of rival territorial claims.