‘I helped seal body of Ruby Rose in drum’

Presented to the media by the NBI on Wednesday, Robert Ponce admits his role in the murder of Ruby Rose Barrameda. PHOTO BY NIÑO JESUS ORBETA

He said he received a “monthly allowance” of P7,000 to keep out of sight after playing a role in one of the most chilling murder cases in memory.

But after two years in hiding, a primary suspect in the gruesome killing of Ruby Rose Barrameda was arrested in Isabela province on Wednesday and admitted he was part of the group that sealed the victim’s body inside a steel drum before it was tossed into the waters off Navotas City.

The National Bureau of Investigation yesterday presented Robert Ponce, 44, said to be a former employee of BSJ Fishing and Trading Co., a firm owned by Lope Jimenez, uncle of the victim’s estranged husband, Manuel Jimenez III.

Interviewed by reporters at the NBI headquarters, Ponce claimed he had nothing to do with the actual killing of Barrameda but that he assisted two men—Eric Francisco and Leonard Descalzo—in putting the victim’s body inside a steel drum and filling it with concrete.

Earlier, he said, lawyer Manuel Jimenez Jr., Barrameda’s father-in-law, ordered him, Francisco and Descalzo to fetch Barrameda from her house in BF Homes, Las Piñas City, in March 2007 and bring her to the BSJ office in Malabon City. 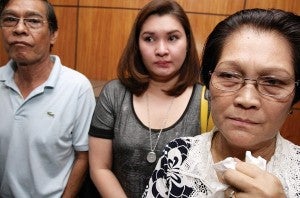 The victim’s father, Robert, sister Rochelle, and mother, Asuncion, arrive at the NBI upon learning of Ponce’s arrest. PHOTO BY NIÑO JESUS ORBETA

“I did not see who killed her,” he stressed in Filipino. “I saw her already dead and I was ordered to help in putting her inside the drum and having it filled with concrete.”

Ponce said he was later instructed to hide in the province by Jimenez Jr., father of Barrameda’s husband, after Barrameda’s body was recovered in June 2009.

Barrameda disappeared on March 14, 2007, after a bitter custody dispute with her estranged husband for their two children. 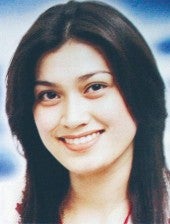 While in hiding, Ponce said, “I received P7,000 monthly as cash allowance through LBC from Attorney Manuel.”

NBI Special Task Force head Rolando Argabioso said Ponce was arrested in Cauayan, Isabela, on Wednesday based on a tip that one of the suspects in the brutal killing was hiding in the province.

Members of the Barrameda family, who went to the NBI office upon learning of the arrest, initially expressed disbelief.

“At first I could not believe it’s true because, honestly, I was already losing faith that the case will move on because of their (Jimenez’s) connections,” said Rochelle Barrameda-Labarda, the victim’s sister.

“The arrest had restored the family’s faith and I am very grateful to the NBI, who followed up the case and arrested a prime suspect even without being asked,” she said.