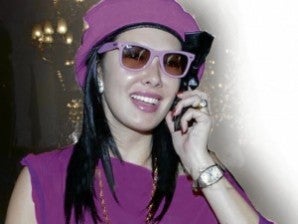 MANILA, Philippines — Apparently having ignored advisories to register early, thousands flocked to Commission on Elections (Comelec) offices in the Visayas to register or transfer their registration just one day before the deadline.

Accompanied by her mother Annabelle Rama, who is running for representative in the Cebu City north district, Ruffa reported her address as Barangay Camputhaw, Cebu City.

Ruffa’s father, Eddie Gutierrez, and her younger brother John Rex “Elvis” also registered in Cebu north district on Monday afternoon. Eddie claimed being a resident of Barangay Busay, Cebu City, while Elvis and girlfriend Alexa Uichico claimed that they have been residents of Barangay Camputhaw in the past few months.

Another brother, actor Richard Gutierrez, is expected to transfer his voter’s registration to Cebu City north district on Wednesday.

People started lining up at the Comelec offices in the Visayas as early as 4 a.m., in the case of Bacolod City.  However, the Comelec personnel had to limit those who could register depending on the number of voters that could be accommodated by the voter registration machines.

Comelec offices in other areas also faced a similar difficulty.  “We have to limit those we can accommodate because it’s too crowded and our voter registration machines (VRMS) can only accommodate from 1,000 to 1,500 registrants per day,” said Jonathan Sayno, election assistant of the Comelec in Iloilo City.

Sayno said each of the five VRMs in Comelec Iloilo City office could process around 200 registrants daily, since they have to capture the voter’s biometrics.

In Negros Occidental, the Philippine National Police (PNP) had to send more policemen to secure the Comelec offices in the towns and cities due to the growing number of people who would like to register, provincial elections supervisor Jessie Suarez said.

In Bacolod City, the Comelec held the registration at the Bacolod Arts and Youth Center as people lining up reached two blocks from the Comelec center.

Bacolod City Elections Officer Mavil Majarucon Sia said they only had three registration machines and could accommodate only around 600 persons.

Polistico said they have been working beyond office hours daily, even extending past 8 p.m. so they could accommodate more registrants as more than 500 persons trooped to their office.

Polistico said the registered voters in Tacloban City could reach more than 100,000.

As of August 22 of this year, the Comelec Tacloban reported that the city had 98,120 registered voters.

On the other hand, Negros Occidental voters could reach 1.5 million, Suarez said.

Capiz provincial election supervisor Wil Arceño also said there would be an increase of more than 10 percent in the number of voters in the province.