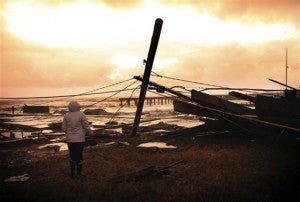 MANILA, Philippines — The onslaught of Hurricane Sandy showed even the most powerful nation on earth was no match to severe weather conditions caused by climate change, senators concerned with disaster risk reduction and management told the Philippine Daily Inquirer on Tuesday.

Senator Loren Legarda, chair of the Senate committee on climate change, indicated that Philippine officials could learn a thing or two about political will as shown by New York’s shutdown of its subway system and the mandatory evacuation of residents as the hurricane was about to hit.

Sen. Gregorio Honasan, chair of the Senate committee on public order, nonetheless, said the country has not been too far behind the US in terms of disaster response despite the disparity between the superpower’s superior capability with what’s available in the Philippines.

“Their sense of preparedness is amazing and the political will of their leaders like Mayor Bloomberg is laudable considering he closed down the subways, forcibly evacuated residents as he did in Hurricane Irene,” Legarda said when asked if Filipinos could learn anything from the US response to Sandy.

“Even President Obama has been on national TV warning people to take it seriously,” Legarda told the Philippine Daily Inquirer in a text message.

Legarda said the severity of the hurricane “can be an important campaign issue as it is for many parts of the world.” Americans would go to the polls early next month to again choose their President and other leaders for the next four years.

“That is why it is sad and uncanny that [Obama’s rival] Mitt Romney mocks the climate change beliefs of President Obama as he did in a September speech when he cited healing the planet and leveling the ocean as if they were non-issues,” Legarda said.

Legarda was recently cited by the United Nations International Strategy for Disaster Reduction as a hero for resilience in recognition of her advocacy to make cities more resilient in the face of natural calamities and climate change.

“Even the most powerful nation in the world and their financial and business center can be at the mercy of natural hazards. Half of Manhattan is without power. Floods ensue despite preparedness but the importance they give to reducing risks is most laudable,” Legarda said.

Legarda said the presence of their US leaders giving messages on TV “is reassuring too.”

“And the evacuation centers with hot food ready to take in the people is a step in the right direction,” Legarda said.

Honasan, for his part, said that the Philippines’ own National Disaster Risk Reduction and Management Council has made significant strides in making the country’s own disaster response already at par with developed countries like the US.

“NDRRMC director Benito Ramos is quite competent. He’s everywhere. We are getting there. If we had more people like him providing the coordinating mechanisms, then I think we are improving our systems,” Honasan said.

Asked if the country’s disaster response could already be compared to the US, Honasan said, “Yes, within our capabilities. I have no complaints. With all [the US’] capabilities, their manpower, they go through the same thing. We are not in bad shape.”

“The only problem is with less coordination, people are more interested in criticizing,” Honasan said of the Philippine situation.

Honasan said the Philippines could also improve on decreasing the reaction time during disasters.

“I’m convinced we’re not doing too badly. But these are things that go with climate change that we cannot prevent,” Honasan said.

“Against nature, there’s no such thing as a developed country,” he added.