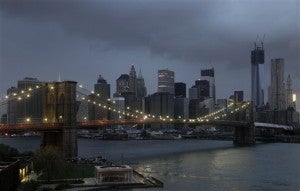 The lights on the Brooklyn Bridge stand in contrast to the lower Manhattan skyline which has lost its electrical supply, Tuesday after megastorm Sandy swept through New York. AP PHOTO

Smoke lingered over many streets after a huge fire devastated 50 homes in the New York borough of Queens, many roads remained blocked by trees, and tunnels were inundated by lingering floodwaters.

Train and bus services remained suspended citywide. Some subway stations had water above platform level. Some residents did not have water in their homes.

Police and ambulance sirens dominated the diminished morning traffic. Pedestrians had to avoid trees torn up by the wind gusts of up to 95 miles (150 kilometers) an hour that hit the city late Monday.

About 193,000 homes in Lower Manhattan had no power after an explosion at a power station, Con Edison electricity company spokesman Alfonso Quiroz said.

He said restoring power would be a “multi-day event”, explaining that equipment had to be dried and tested before it could be turned on again.

“Don’t be surprised if it takes a week,” he warned.

The streets were pitch black until the sun rose and the giant apartment blocks of Lower Manhattan were left without elevators.

“I have no water, no gas, I walked down 20 flights of stairs to get to street level and now I must try to get to the office,” said accountant Joseph Warburton as he headed for Midtown along Third Avenue.

Restaurant windows were broken or covered with protective tape.

Manhattan borough president Scott Stringer said: “We need to get the lights on. All this is going to take time. It is going to be a very long couple of weeks.”