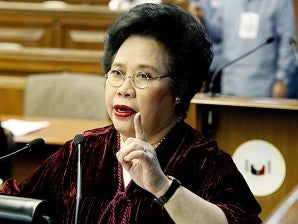 Sen. Miriam Defensor-Santiago, cosponsor of the contentious bill, said it was time to put it to a vote after the senators had argued all the issues surrounding the bill. FILE PHOTO/SENATE POOL

A “watered-down” reproductive health (RH) bill would be acceptable to some of its supporters as long as it achieves its purpose of swaying opponents and ambivalent lawmakers into backing the controversial measure, according to a representative.

Ifugao Rep. Teddy Baguilat on Monday said RH bill proponents had agreed on the amendments in the hope that they would lead to the passage of the controversial measure.

“It’s fine by me, but only if it’s going to get a significant number of anti-RH lawmakers to support the bill. Otherwise, if the math stays the same, we just compromised for nothing,” he said.

Baguilat explained that despite the softening of the bill’s language, the core and intent of the measure remained.

“Admittedly, the language has been styled and some provisions diluted as a concession to its oppositors. But it’s still a population policy that mandates, among other things, state procurement and distribution of contraceptives to those who don’t have access to them,” he said.

Sen. Miriam Defensor-Santiago, cosponsor of the contentious bill, said it was time to put it to a vote after the senators had argued all the issues surrounding the bill.

“It (has) become very transparent that other people just want to delay the bill for the sake of delay,” she said in a radio interview the other day.

Gabriela party-list Rep. Luzviminda Ilagan said her group was amenable to the amendments that simply “elaborate and particularize existing provisions.”

The amendments also reinforce Gabriela’s position that the RH bill must ensure that poor women should have priority access to health services, and it must not be a population control measure, Ilagan said.

The latest version of the bill, which was intended to replace the original version, prioritizes the distribution of contraceptives to the poorest of the poor, who have no access or cannot afford these devices that would help them plan their family size.

It also prohibits contraceptives which prevent the implantation of a  fertilized ovum in the uterus, which are deemed abortifacients.

House leaders earlier said the new version of the bill was crafted in response to the opposition raised against the original measure, which sought to provide universal information and access to family planning methods. With a report from Cathy Yamsuan