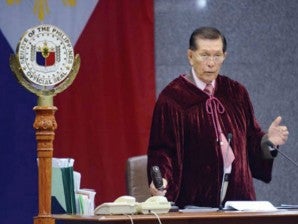 MANILA, Philippines—The Philippines is quite ready to comply with international conventions but the intergovernmental Financial Action Task Force (FATF) has no right to dictate when or how the country should pass laws meant to strengthen its antimoney laundering regulations, said Senate President Juan Ponce Enrile.

Enrile made this defiant assertion in the face of the Senate’s failure to pass an amendment to the Anti-Money Laundering Act (Amla) that would increase the predicate crimes to be covered by the Amla—a key demand of the Paris-based watchdog body to combat money laundering and terrorism financing.

“As a member of the convention, we will have to comply but they must not tell us, ‘You do this on this given time, otherwise we will blacklist you,’” Enrile told reporters.

“Otherwise, we are no longer a sovereign country, we [would be] under the control of a task force over whom we have no say,” he said.

From gray back to black

The FATF was expected to meet on Friday to evaluate the compliance of countries, including the Philippines, with rewriting their laws to conform with the task force’s prescriptions for combating money laundering.

Sen. Teofisto Guingona III warned that the country faced being thrown into the FATF blacklist—the roster of countries seen as noncooperative in the global fight against money laundering—after the Senate failed to pass the necessary third amendment to Amla on its last session day before a two-week congressional break.

A few months ago, the FATF upgraded the Philippines from its dark gray to gray list after Congress passed two of the three laws demanded by the task force—Republic Act No. 10167 that waived the requirement for the Anti-Money Laundering Council to give notice to suspected money launderers that their bank deposits are being monitored and RA 10168 that criminalizes the act of giving money to known terrorists.

The third FATF demand—the amendment that would increase the predicate crimes that are to be the basis for the monitoring of suspicious bank accounts—remains in the interpellation stage in the Senate.

Sen. Gregorio Honasan, a Senate assistant majority leader, said the country should not let itself be stampeded into passing the amendment.

Err on side of caution

“I would rather err on the side of caution than rush it and suffer the same fate as the cybercrime law,” he said, referring to the newly signed RA 10175 which was temporarily suspended by the Supreme Court after a public outcry and a raft of petitions were brought to the high court questioning its constitutionality.

He said many senators still had reservations about Senate Bill No. 3123 that proposes the third Amla amendment.

“Too many legal rights have been violated in the spirit of good laws. That’s why senators are rather wary in this case,” he said.

Guingona, who coauthored SB 3123, has called on his colleagues to pass the amendment as soon as Congress resumes its sessions next month.

“In two days we might fall into the blacklist, formally referred to as the list of Non-Cooperative Countries or Territories,” he said in a manifestation before the Senate on Wednesday night when it became apparent that the amendment would not pass.