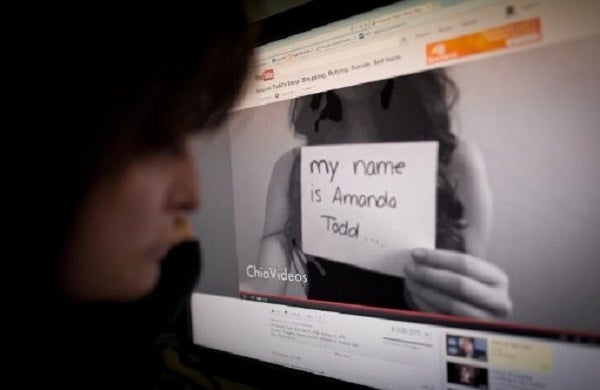 A woman views the YouTube video of Amanda Todd on an office monitor in Washington, DC on October 16, 2012. Amanda Todd, 15, was found dead by suicide in a Port Coquitlam home last Wednesday – five weeks after posting the YouTube video outlining the abuse she endured both online and in person. The video has since gone viral and Todd’s story has made international headlines. On Monday, Canada’s Members of Parliament debated a private member’s motion to create a national bullying prevention program. AFP/MLADEN ANTONOV

MONTREAL—Eight teenage Canadian girls have been arrested on suspicion of bullying a schoolmate, police said Friday.

The arrests came as Canada continues to mourn the October 10 suicide of an adolescent girl who had posted a clip on YouTube complaining of harassment by an adult and from schoolmates.

Vigils for Amanda Todd, who was 15, and for victims like her were planned for Friday in several Canadian cities and in other countries including the US, India, Spain and Japan, according to Canadian media reports.

In Toronto, a quarter of a million students were to observe a minute’s silence.

The new case emerged at a secondary school in the town of London, in Ontario province. The students there range in age from 13 to 15.

Police gave few details, saying only that a student had been the target of physical, emotional and cyber bullying.

Police said they learned of the case from witnesses who came forward and through an Internet portal at the school allowing people to send anonymous tip-offs about bullying.