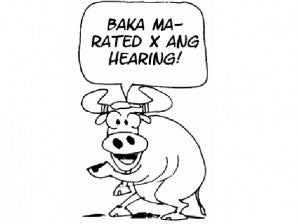 From circus to sitcom.

Clowns professing serious political plans might have characterized the earlier filing of candidacy at the Commission on Elections (Comelec), but Friday’s hearing for rejected candidates turned up a colorful cast that left even the chair of the election body in stitches.

An internal squabble among members of Kilusang Bagong Lipunan (KBL) led one of its candidates to declare that there were “too many idiots in this country,” while another senatorial hopeful claiming to be the “heir” of the supposed rightful owner of the Philippine archipelago, presented several gold medals allegedly given him by past presidents for him to keep mum about his family treasures.

But what sent the session hall into guffaws was the brief flirting episode between a 75-year-old widow and Comelec Chair Sixto Brillantes, that had the Comelec chair blushing furiously.

The Comelec earlier gave the green light to 27 senatorial hopefuls, while giving the rest of the 84 candidates a chance to justify their bid at a two-day hearing.

With KBL leaders Vicente Millora and Jaime Opinion separately presenting a certification of nomination and acceptance (Cona) for the party’s senatorial slate as party president, several KBL candidates registered confusion.   Among them was Alma Abella who, out of exasperation, declared:  “The two [leaders] do not understand each other. There’s a lot of idiots in this country right? That’s why I’m getting a headache.”

“We are close to having a headache ourselves,” Brillantes countered, eliciting laughter.

But Brillantes’ impending headache seemed to have been banished by the red-clad Norma Nueva, who said her platform would focus on uplifting the plight of solo parents, abused wives and neglected widows.

“So actually, your advocacy is to help the byudas (widows) … what about the byudos (widowers) like me?” asked the chair.

In response, the 75-year-old widow said it was a pleasure to know that Brillantes was single like her.

“Chairman, may asim pa ho ako at may anghang pa ho ako (I’ve still got it) … I’m very much available and negotiable and it will be an honor to have the chairman as my future,” said Nueva, who became a candidate of Partido Manggagawa Magsasaka after learning that Opinion had withdrawn KBL’s Cona.

She added that it had been 19 years since she felt her heart flutter, to which Brillantes playfully replied, “For me, it has been 20 years.”

The exchange sent the entire session hall into guffaws, with the four other election commissioners present—Rene Sarmiento, Grace Padaca, Lucenito Tagle and Armando Velasco—joining in. Brillantes, who turned scarlet at the laughter, also joined in.

Sarmiento then asked Nueva if she also has the “asim” to launch a nationwide campaign, given her age. The widow confidently said that she had many supporters in the 2004 elections.

“How many votes did you get?”  Sarmiento followed up.

“I’m having a memory lapse, but I had plenty [of votes],” Nueva said.

On a more serious note, Brillantes said he felt bad about the squabbling at KBL, a party for which he said he has a high regard.

“You are making a mess of your party … you all don’t understand each other,” Brillantes said.

KBL candidate Melchor Chavez said he was officially nominated by the party and that he had submitted two certificates of candidacy separately signed by Opinion and Millora.

With Opinion withdrawing his Cona, Chavez said he still had his Cona filed by Millora, “who is our party president.”

But Brillantes told Chavez that Millora should have been present at the hearing to enlighten the en banc as to how and when he became KBL president.

“As far as the records of the commission are concerned, it’s Jaime Opinion,” the Comelec chair said.

Said Chavez:  “You may call our president, Millora, to shed light on the squabbling in our party, but as far as I know, the commission has no business with our party.”

A deadpan Brillantes replied, “Since you say we have no business about your party, then we better cancel your accreditation today.”

Grandpa gave Guam to US

The two-hour hearing ended with the appearance of Salam Lacan Luisong Tagean, the “heir” of the supposed rightful owner of the Philippine archipelago, who presented several gold medals allegedly given him by past presidents for him to keep quiet about his family treasures.

Tagean also presented documents that included what he claimed was the “Treaty of Paris.”

“My great grandfather gave Guam to America because of the Treaty of Paris,” he said.

The Comelec chair humored Tagean who appeared at the hearing wearing sunglasses and a red keffiyeh. “Do you know what the Treaty of Paris is, because we weren’t born yet at that time,” Brillantes asked.

“Even I wasn’t alive yet [at that time], but my documents don’t lie,” Tagean said.