Recto betrayed us with his version of sin tax bill, says BIR chief 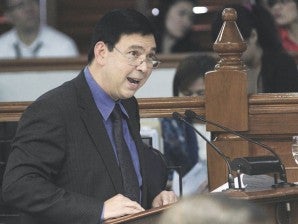 The last words of Julius Ceasar to his friend Marcus Brutus as he confronted his assassins on the Ides of March reflected the sentiment of finance and health officials a day after Sen. Ralph Recto reported out the Senate version of the sin tax reform bill.

The bill proposed by Recto’s ways and means committee envisioned increased revenues reaching P15 billion in new tax rates for tobacco and alcoholic drinks—way below the projected P60 billion targeted by the departments of finance and health.

Internal Revenue Commissioner Kim Henares said that officials of the two departments had given Recto’s panel “cooperation, assistance and all the data” he needed.

“They put in hours of work, till the wee hours of the morning,” Henares said in a news conference at the Department of Justice Thursday.  “A lot of them felt betrayed.”

Sen. Miriam Defensor-Santiago, one of the authors of the measure,  called on students and social media users to register their protest against what she called the “death star bill.”

“I am gobsmacked—speechless with amazement—at the committee report. It bears no recognizable resemblance to my bill. It is an abject surrender to the very rich and very powerful tobacco and alcohol lobby,” Santiago said in a statement.

“Under the Santiago bill, government will raise P60 billion for the first year. By contrast, the Recto bill will earn only P15 billion. The foregone revenue could go to universal health care, such as more hospitals, rural health units, and barangay health stations,” she said.

She said she shared the disappointment of Finance Secretary Cesar Purisima and Health Secretary Enrique Ona as well as the antismoking groups.

Henares said administration officials had expected the Senate to improve on the House version of the bill that projected an income of P31 billion.

She stressed that it should be regarded as a “health measure,” rejecting Recto’s explanation that he could not propose hefty taxes on tobacco, beer and other alcoholic drinks because this would discourage people from buying these and thus, would mean less revenues.

Sin tax revenues will go to universal health coverage and the upgrade of government hospitals and other facilities, she said.

Asked to comment on reports of a strong tobacco industry lobby against the measure, she said taxes in accordance with law should be followed. “What we are trying to take care of is the health and the right of the many.”

Justice Assistant  Secretary for Legislative Affairs Zabedin Azis said in the same news conference: “We will need assistance from all concerned, those who believe sin taxes are for the benefit of the country. We have to work together to convey to our senators there is really a need to adopt this.”

In an interview with reporters on Wednesday, Recto insisted that his report represented  “an equilibrium” and its final form and shape was up to his colleagues.

The Philippines already has one of the lowest prices of cigarettes and alcohol in Southeast Asia, Santiago said. “When cigarettes and liquor are cheap, more people will use them…. That’s why for every hour, 10 Filipinos die from tobacco use. Smoking causes 240 deaths every single day,” she said.

Santiago said the tax on tobacco should be 70 percent of the price of the product according to an international convention on tobacco control.  This is why her bill imposes a tax of P30 per pack of cigarettes by 2015, she said.

“My bill imposes a unitary tax system, as recommended by the World Health Organization. The Recto bill uses a three-tier tax rate for tobacco and alcohol products, making them cheaper and thereby encouraging their use,” Santiago said.

“The increase in taxation is no longer as burdensome,” Marcos told reporters. “Producers on the tobacco side are happy because at least Senator Recto understands the complicated issue of taxation.”

In a speech at the 38th Philippine Business Conference and Expo at the Manila Hotel, President Benigno Aquino called on lawmakers to craft a sin tax bill that would generate more revenues to give the public more access to health services.

To make the country a viable investment destination, the President said the government was investing not only in infrastructure but in human capital, by granting conditional cash transfer to the poor and expanding the coverage of the Philippine Health Insurance Corp. program.

“We are also counting on the solidarity of our legislators in the sin tax bill, which can only improve our fiscal situation. With the bulk of tax revenues generated from this proposed measure going to universal healthcare, we will be able to widen access to, and improve health services for all,” he said.

Presidential spokesperson Edwin Lacierda declined to say if Malacañang was dismayed by the Recto bill.

Lacierda said there were “safety nets” that would address the concerns of the tobacco farmers.

On Recto’s claims that his version was more practical, Lacierda pointed to the experience of other Southeast Asian countries where companies still enjoyed high revenues despite high government taxes.

“For instance in Singapore, even if the sin taxes are high, they still enjoyed high revenues,” he said.