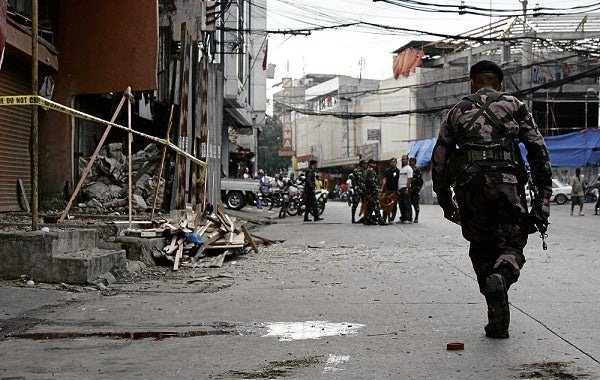 LOOKING like a war zone, the site of a bomb explosion in Cagayan de Oro City is secured by police. Authorities refused to call the bombing an act of terror although improvised explosive devices, a weapon known to be used by terror groups, were used. JB R. DEVEZA/INQUIRER MINDANAO

CAGAYAN DE ORO City—Two people were killed and two police officers were wounded in an explosion outside a hotel here that authorities said was caused by an improvised explosive device (IED) and which took place in a city not known for terror attacks in the past.

A second bomb had been found and defused near where the first bomb went off.

Police said the IED, which is known to be a weapon of choice of terrorists, exploded outside the Maxandrea Hotel near the Cogon Market here at 2 a.m. Thursday.

As police were investigating the blast and conducting clearing operations, a second IED was found underneath a vehicle owned by TV network GMA 7 which was parked near the hotel. The second bomb was defused.

The slain victims of the explosion were identified as Rudy Jute, a bar attendant of the nearby Welshire Inn, and Expidito Endan, 62, a jeepney barker.

Chief Supt. Gerardo Rosales, city police chief, said prior to the explosion, the management staff of the Maxandrea Hotel had alerted police about the presence of a suspicious package outside the establishment.

Canilanza and Dano were part of the police team that was sent to check on the package.

Jute, the bar attendant, got curious and went out of the Wilshire Inn to see what the fuss was about after a police cordon started to surround the area. It was when the bomb exploded.

Mayor Vicente Emano, who went to the site of the explosion, quickly declared that the bombing was not the work of terrorists, though he couldn’t explain the use of IEDs.

“No terrorist will leave a bomb at 2 a.m. in an area where there are no people,” Emano said.

But Emano did not elaborate on his theory, adding that he will wait for the results of the police investigation.

A ranking police officer, speaking on condition of anonymity for lack of authority to discuss the matter with reporters, said he agreed with Emano’s observation the bomb attack was not terror-related.

“It’s a small IED, probably with fertilizer as the explosive material,” said the source. Terror groups, he said, use mortar shells.

Chief Supt. Gil Hitosis, Northern Mindanao police chief, said there had been no threats in the city prior to the bombing.

Hitosis said police are still uncertain about the identity of the bomber or bombers but a SIM card found in the area and believed to have been used to remotely detonate the bomb could provide clues.

Lt. Col. Eugenio Osias IV, the regional Army spokesperson, said the Army is working closely with police in the investigation.

Rosales said police suspect that a single set of suspects is responsible for the two bombs.

He said CCTV footage taken near the area showed that at least three men are involved in the attack. Reports from Cai Panlilio, JB Deveza and Bobby Lagsa, Inquirer Mindanao