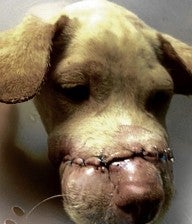 CEBU CITY—A dog so mangled that part of its snout hung under its jaw when it was found had been operated on and is now recovering, its case serving as an example of man’s capacity for brutality and kindness and how animals are often at the receiving end of these.

Now known as “Kenneth,” the dog was found last Sept. 29 wandering the streets of Talisay City by a pedicab operator, Janjan Solon.

When he was found, Kenneth was so disfigured that it was difficult to describe how he looked like.

Janjan took the dog and gave him the name Kenneth after the Cebuano word kinit-an, meaning found.

Veterinarians who examined Kenneth said his snout must have been slashed by a sharp object. At the time Janjan found Kenneth, according to an assessment made by veterinarians, the dog had been wandering for more than two weeks with the untreated wound.

The plight of Kenneth attracted online attention after Janjan’s nephew, Michael, took pictures of the dog and posted these in his Facebook account last Oct. 3.

A team of eight doctors and three veterinary assistants supervised the four-hour surgery on Kenneth’s face.

Dr. Ivy Alvarez, of the Animal Wellness Veterinary Hospital, said when the surgery team got hold of Kenneth, the condition of the dog’s face was beyond description.

Yet despite the cruelty that Kenneth suffered, Alvarez said the dog remained sweet.

“I almost cried when I first saw him. But despite what happened to him, he was really sweet,” said Alvarez.

Alvarez said the eight-man surgery team was able to reattach the portion of Kenneth’s nose, palate and skin that had been apparently hacked off but not completely that they clung to Kenneth’s face.

“He will eat normally and live normally,” said Zialcita. “We assure you that nothing significant will change in the dog’s life,” he said.

The two groups that raised funds for Kenneth’s surgery—CSDCI and IRO—are demanding that the human who abused Kenneth be made to answer for the brutality. “Kenneth is an example of a victim of people,” said Gilliam Roque, head of CSDCI.