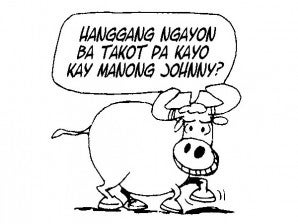 Who is afraid of Juan Ponce Enrile?

Twenty-six years after he silenced political opponents as Ferdinand Marcos’ martial law administrator, Juan Ponce Enrile either still evokes fear or those hoping he would be ousted as Senate President are too disorganized to get him out of his post.

The number of senators needed to topple Enrile is out there but no one seems interested in actually moving to oust him. One reason for this, longtime Senate observers say, is that Enrile currently enjoys a high popularity rating, based on recent surveys.

Replacing Enrile was not on the menu when President Benigno Aquino hosted a private dinner in Malacañang on Tuesday for senators who helped oust  Chief Justice Renato Corona in an impeachment trial in May.

One senator said Enrile could rely on only three loyalists—Senate President Pro Tempore Jose “Jinggoy” Estrada, Majority Leader Vicente Sotto and Sen. Gregorio Honasan—to cast their lot with him, at least for now. The four are collectively known as the Senate’s “macho bloc.”

The senator whom the Philippine Daily Inquirer talked with requested anonymity because he did  not want to be seen as interested in the job.

The senator said knowing that Enrile and his supporters could be easily outnumbered was enough to inspire discord.

“It’s just simply a case of seeing Enrile up there lording it over when he only has three followers. Why is that?  It’s anomalous!” the senator said.

Fears of a Senate coup remain a hot topic among the chamber’s employees. A common sentiment is that Senate workers like Enrile because he is generous with year-end bonuses for them.

Enrile has maintained he would welcome a replacement any time and that he has no plans to cling to his post.

Senators Ralph Recto and Franklin Drilon of the Liberal Party and Manuel Villar of the Nacionalista Party have been touted as possible successors.

Sen. Antonio Trillanes IV recently admitted working for Enrile’s ouster after a bitter public quarrel with him over the West Philippine Sea territorial dispute between the Philippines and China.

At the session hall on Monday as the coup rumors flew, the Inquirer asked Trillanes if there was really a move to oust Enrile. Trillanes only smiled and said, “I don’t know.”

Trillanes can also be counted on for support, as well as the Nacionalista bloc of Villar, Ferdinand Marcos Jr. and Miriam Defensor-Santiago.

“Add the senators from the Liberal Party—Francis Pangilinan, Recto, Drilon and (Teofisto) Guingona III—and that would make 12.  Puwede nang mawala si  JPE (Enrile can then be removed),” the source added.

The source said Enrile had gained enemies among his original supporters, or those who signed the Senate resolution backing him as Senate President in July 2010.

“So many things have happened,” the senator said, adding that Enrile’s  opposition to the reproductive health (RH) bill and his verbal tussle with Trillanes were only two of them.

But those thinking of becoming the next Senate leader would not only have more work in his hands, the source said.

“The chamber itself is unwieldy.  Sometimes the senators also behave like little children.  It’s not just the discontentment with Enrile’s leadership.”

Marcos said  “the problem is there are no takers (for the position of Senate President).” Besides, it is only Trillanes who has openly admitted he is working for Enrile’s ouster, he added.

Marcos told reporters the possibility of Enrile’s ouster was remote. “I don’t think there is a plot under way—Maybe I’m out of the loop,” he said.

Marcos added it would be more “sensible” to replace Enrile in the next Congress after the 2013 midterm elections.

Senators supposedly plotting to oust Enrile—who obviously remains in the good graces of Mr. Aquino—skipped Senate politics as they broke bread with him.

Eighteen senators were present at the dinner, including all the possible contenders for Senate President—Franklin Drilon, Edgardo Angara, Villar and Pangilinan. Except for Pangilinan, the other three had previously served as Senate leaders.

“It was a long delayed thank you dinner initiated by Malacañang between the President and the 20 senators who voted in favor of conviction in the impeachment trial,” Pangilinan said on the phone. “It was simply dinner and small talk.”

There was music, Pangilinan quipped, “but no singing among senators.”

Asked about the significance of the President dining with the senators, Pangilinan said this proved that “both Malacañang and the Senate are committed to working together to ensure the President’s reform agenda is given the legislative support needed for it to be realized.”

Trillanes was also at the dinner.

“If it had anything to do with any coup, why would we have both JPE and Trillanes in the same dinner?” Pangilinan said.

“Only Chiz was absent because it was his birthday,” Pangilinan said, referring to Escudero. Sen. Aquilino “Koko” Pimentel III also could not make it as he was still in the United States.

The dinner lasted beyond 10 p.m. “but a few stayed behind,” Pangilinan said. With a report from Michael Lim Ubac