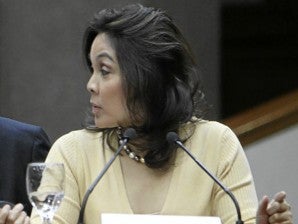 “I hope to eliminate the chilling effect that may impose undue boundaries on our people’s exercise of freedom of expression,” Legarda said in a statement explaining her filing of a bill to amend the cybercrime law.

“Consistent with the Constitutional mandate of promoting free expression, it is imperative for institutions such as the legislative branch of government to adopt a policy towards the proliferation of a free market of ideas,” she added.

The cybercrime law has been widely criticized as repressive. Several petitions have been filed seeking to revoke or amend the law before the Supreme Court on grounds that it is un-Constitutional. Netizens have also conducted both online and street protests.

Legarda said that there must be a balance between protecting the people from criminal activities and the freedom of expression.

“The vulnerability of the cyberspace to pollutants, such as pornography, cybersex, fraudulent practices and promotion of human trafficking were precisely the reason for the passage of the Cybercrime Prevention Act of 2012,” she said.

“Adopting such policy to prevent pollutants from spoiling the minds of our people must not be done at the expense of our valued right to free speech,” she added.

Legarda has also filed Senate Bill 3294 seeking to decriminalize libel and removing the penalty of fine and imprisonment.

She pointed out that freedom of speech has been “easily stifled with the mere threat of criminal libel.”

Legarda said that the continued criminalization of libel “will be a huge hindrance in efforts aimed at promoting good governance and exacting accountability on our public officials.”