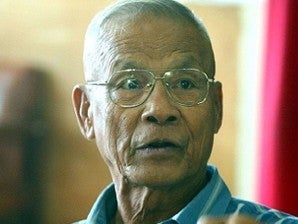 MANILA, Philippines — At a point where the government and the Moro Islamic Liberation Front hurdled a great obstacle and agreed a new framework for the peace process to solve decades-long conflict, a lawmaker said that the next step would be for a transition commission to be formed to create the basic law for the new Bangsamoro territory.

Muntinlupa City Representative Rodolfo Biazon, chairman of the House committee on national defense and security, told reporters that it would be up to either the Congress or the Executive branch to form the transition commission which will be tasked to draft the basic law replacing that of the Autonomous Region in Muslim Mindanao (ARMM).

The plan is to include cities of Cotabato and Isabela as well as other communities in the peripheral provinces to the new territory. Those areas were not covered by the ARMM’s plebiscite in 2001.

He said that inclusion of the new areas to the Bangsamoro territory “would be the last base and if that happens we can proceed to get programs as a benefit from the peace process for the whole of Mindanao specifically on areas of jurisdiction of the Bangsamoro (political entity).”

“The agreement that will be signed is still just a framework. But this is opening the door to peace in Mindanao,” he said, adding that he asked Secretary Teresita Deles to present the agreement to Congress.

He said that details on the agreement should be fleshed out as the transition commission prepares the draft, pointing out that “there will be questions on what power belongs solely to Bangsamoro… These will be defined in the law. The devil is in the detail, this is where we’re going to have a debate.”

“But Congress is ready to give peace a chance through this needed enactment of a new Bangsamoro political entity.”