Binay sees ‘some issues’ in Padaca’s appointment in Comelec 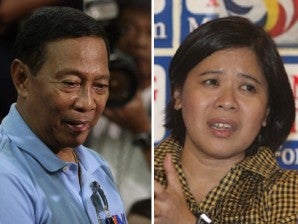 MANILA, Philippines—Vice President Jejomar Binay on Wednesday said that some issues hounded the appointment of former Isabela governor Grace Padaca as new Commissioner of the Commission on Elections (Comelec), though he added he respects her appointment.

“There are some issues being raised but we have to respect the appointment of the President,” Binay said in an interview with reporters after he gave a speech at the 3rd ASEAN maritime forum held at the Manila hotel.