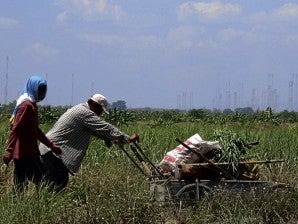 CITY OF SAN FERNANDO, Philippines — The proposed 2013 budget does not give priority funding for agrarian reform communities, including the Hacienda Luisita owned by President Benigno Aquino III’s family, according to the vice chair of the House committee on appropriations.

Pampanga Rep. Anna York Bondoc, who is in charge of the Department of Agrarian Reform’s budget in her committee, said this has been the consequence of some provisions that have not been deleted from the budget for DAR.

“The President has virtually crippled DAR because he has allowed the transfer of several DAR personnel and services to the Department of Agriculture although DAR has not yet completed its land acquisition and distribution targets,” Bondoc said by telephone on Sunday.

The matters of scaling down the number of DAR personnel and transferring them and the support services to DA are contained in Item No. 5 of the DAR budget as the agency winds up the land acquisition and distribution (LAD) of the Comprehensive Agrarian Reform Program Extension with Reforms (Carper) on June 30, 2014, the DAR Employees Association (Darea) said in a statement.

DAREA said this was “not only contrary to the direct mandate of [Carper] but likewise emasculates the essence of the agrarian reform program.”

The LAD balance was at 302,672 hectares in June, a DAR report showed. Hacienda Luisita was among those covered by Carp. The Supreme Court, in November 2011, ordered the distribution of 4,195 ha in the estate among 6,296 farm workers. DAR has not yet published the list of verified beneficiaries.

Darea sought the deletion of Item No. 5 in the “interest of public service and consistent with the avowed policy of the State to promote comprehensive rural development and agrarian reform.”

In a letter on Sept. 11, Negros Oriental Rep. Pryde Henry Teves, chair of the House committee on agrarian reform, appealed to Mr. Aquino to delete Item No. 5.

Unlike in the 2011 and 2012 budgets, DAR has no more right to identify the sites of farm-to-market roads, having transferred this to DA.

Bondoc said in a petition on Sept. 24, 150 members of Congress requested Speaker Feliciano Belmonte Jr. to help restore to DAR its allocation for farm-to-market roads in the 2013 budget.

A copy of the minutes of the Aug. 2 budget hearing showed that Agrarian Reform Secretary Virgilio de los Reyes estimated that 10,973 DAR employees would be affected by the rationalization scheme. Of these, 748 work in its central office in Metro Manila, 1,201 in regional offices, 2,829 in provincial offices and 6,195 in municipal offices.

De los Reyes denied that 7,000 employees would lose their jobs.

Bondoc said De los Reyes had said that the Department of Budget and Management made the transition plan without consultation with DAR employees. Budget Secretary Florencio Abad is abroad and could not be reached for comment.

Read Next
Juana Change, cultural activist Celdran lead anti-epal campaign
EDITORS' PICK
What to watch out for when selecting a video surveillance solution
Heads may roll at BOC, says Palace if sugar smugglers are allowed to use recycled import permits
vivo brings to the Philippines a powerful smartphone with a slimmer body, the vivo Y02s for only PHP 6,499
DOH reports increase in daily COVID-19 deaths, mostly unvaxxed
Palace: Biggest supermarkets in PH commit to sell sugar at P70 per kilo
House energy committee chair Arroyo bats for cheap electricity
MOST READ
DepEd to give teachers P5K cash allowance within first week of classes
Alyssa Valdez to miss Creamline’s AVC Cup campaign
Brian Poe-Llamanzares receives his PhD in Public Administration
Ambulance driver dies of heart attack en route to pick up patient in Biliran town
Don't miss out on the latest news and information.