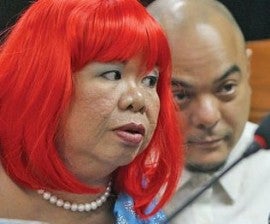 MANILA, Philippines — Satire goes to the Commission on Elections (Comelec) on Monday.

Juana Change (theater and TV personality Mae Paner) is scheduled to file her certificate of candidacy (COC) at the Comelec in Manila as representative of the Epaliticians Party List (EPaL), a group of “epaliticians” who felt maligned and marginalized by an anti-epal movement.

Going to the Comelec on the first day of the filing of COCs for the May 2013 local and national elections would only be the latest in the series of “creative responses” to the serious problem of credit-grabbing politicians, Paner said.

Paner and cultural activist Carlos Celdran recently led the anti-epal tour of Quezon City, which eventually led to Mayor Herbert Bautista’s removal of tiles all over the city bearing his initials HB.

The duo plans to take the tour to other cities of Metro Manila and eventually to the rest of the country.

“Epals are those politicians who take credit for anything that they do, which is their duty to fulfill in the first place,” said Paner, a regular fixture in the advertising world where she has worked as actor, producer and director.

Paner, also a sought-after stage actor, told the Philippine Daily Inquirer in an interview that the epals have been a scourge of the political landscape because they have been reinforcing the false notion that they should take credit for bringing various projects to their towns or districts.

According to Paner, the anti-epal movement that she and Celdran are involved with, hopes to make Filipinos aware that politicians should not get away with making it appear as if they bankrolled the construction of roads and bridges, and financed the distribution of relief goods, for example, when in fact these were funded by the people’s money.

Paner said that with elections just around the corner, epals have been plastering their faces on billboards and posters announcing everything from “happy fiesta” to “happy birthday.”

“What is all this but early campaigning,” Paner said.

Celdran told the Philippine Daily Inquirer that given the seriousness of the situation, it would take some creativity to get the people’s attention and combining the Juana Change and Damaso personas would do just that.

Celdran shocked the Archdiocese of Manila and the Catholic faithful when he held up a placard with the word “Damaso” in the middle of a Mass at Manila Cathedral on Sept. 30, 2010, to protest the Church stand against the reproductive health bill. Padre Damaso is a character in Jose Rizal’s novel “Noli Me Tangere” who was known to be cruel and abusive. For that stunt, Celdran was jailed for a day.

Celdran said, however, that he and Paner were mere catalysts and that it was the general public that got the anti-epal campaign going.

Ordinary citizens are sending in pictures and messages about epaliticians in their area putting their faces on everything from cans of sardines to bags of rice and even toothbrushes for distribution to school children, according to Celdran.

“Filipinos are now getting angry with the gall of these politicians to take credit for everything,” he said, adding that the anti-epal movement being pushed by several groups has caught on because it has been easy to relate to and evidence has been easy to collect.

“Filipinos have become smarter and more are coming to realize that epalism is an insult,” Celdran said.

He also credited Aquino with providing the democratic space for the anti-epal campaign to work because of his own policy against the “utak wangwang,” which attacked politicians’ sense of entitlement.

Paner said an epal-free Philippines was the goal of the movement. “And this is just the tip of the iceberg. By talking about epalism, we can talk about other problems underneath the surface, such as patronage politics,” she said.

In the meantime, Celdran said he and Paner would continue to use art as a weapon against the establishment.

Art has demonstrated its power to transform and the growing success of the anti-epal campaign shows that it still is—and probably always will be—a force to reckon with, according to Celdran.

Paner put a damper on the giddiness surrounding the Aquino administration when she, in her popular Juana Change persona, attacked in a short film aired via YouTube the President’s purchase of a “secondhand” Porsche just a few months after he became President on a platform of anti-corruption and good governance.

The Porsche short film was just the latest in the series of political satire pieces that she, as Juana Change, has been distributing for free through YouTube since 2008 as part of her political advocacy.